Ages of American Capitalism: A History of the United States (Hardcover) 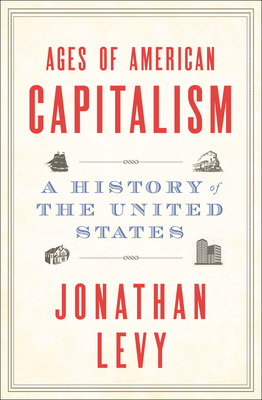 Ages of American Capitalism: A History of the United States (Hardcover)


Not On Our Shelves—Ships in 1-5 Days
A leading economic historian traces the evolution of American capitalism from the colonial era to the present—and argues that we’ve reached a turning point that will define the era ahead.

“A monumental achievement, sure to become a classic.”—Zachary D. Carter, author of The Price of Peace

In this ambitious single-volume history of the United States, economic historian Jonathan Levy reveals how capitalism in America has evolved through four distinct ages and how the country’s economic evolution is inseparable from the nature of American life itself. The Age of Commerce spans the colonial era through the outbreak of the Civil War, and the Age of Capital traces the lasting impact of the industrial revolution. The volatility of the Age of Capital ultimately led to the Great Depression, which sparked the Age of Control, during which the government took on a more active role in the economy, and finally, in the Age of Chaos, deregulation and the growth of the finance industry created a booming economy for some but also striking inequalities and a lack of oversight that led directly to the crash of 2008.

In Ages of American Capitalism, Levy proves that capitalism in the United States has never been just one thing. Instead, it has morphed through the country’s history—and it’s likely changing again right now.
“A stunning accomplishment . . . an indispensable guide to understanding American history—and what’s happening in today’s economy.”—Christian Science Monitor

“The best one-volume history of American capitalism.”—Sven Beckert, author of Empire of Cotton
Jonathan Levy is a professor in the Department of History and the John U. Nef Committee on Social Thought at the University of Chicago. His first book, Freaks of Fortune: The Emerging World of Capitalism and Risk in America, won the Organization of American Historians’ Frederick Jackson Turner Award, Ellis W. Hawley Prize, and Avery O. Craven Award, as well as the American Society for Legal History’s William Nelson Cromwell Book Prize. He lives in Chicago, Illinois.
“Prodigiously researched, elegantly written, and relentlessly interesting . . . Ages of American Capitalism deftly weaves strands of economic, business, political, social and intellectual history into an engaging, accessible narrative.”—The Washington Post

“It is impossible to understand the United States without understanding its economic history. This book, from one of the nation’s foremost historians of capitalism, brings that important and endlessly fascinating story to life, taking the reader on a whirlwind tour of plantations and factories, boardrooms and government offices. If you want to get a better sense of where we are, think about how we got here.”—Sven Beckert, author of Empire of Cotton

“Ages of American Capitalism is a monumental achievement. Jonathan Levy has crafted an economic history that rivals Eric Hobsbawm’s and Charles Kindleberger’s in ambition, augmented by a thorough analysis of the legal and political currents that have shaped economic change across 350 years.”—Zachary D. Carter, author of The Price of Peace

“A remarkably shrewd, sweeping, and entertaining history of American capitalism that strikes at the heart of one of the great American fallacies: that markets can ever be separated from society, politics, and history.”—Richard White, author of The Republic for Which It Stands

“American capitalism is in crisis. To know how to get out of the mess, you need to know how we got into it. That takes a historian. This is a book with the ambition and originality of Adam Smith’s Wealth of Nations. . . . Unputdownable.”—James Robinson, co-author of Why Nations Fail

“In this monumental work, Jonathan Levy has written a history of economic life in the United States that puts capital back at the center of our nation’s history. In his sophisticated yet accessible assessment, Levy shows how the institutions that define the meaning and purpose of capital have evolved rather dramatically over the past few centuries, transforming not only the nation but the meaning of capitalism itself. Ages of American Capitalism is a splendid book.”—Stephen Mihm, author of A Nation of Counterfeiters

“The sprawling saga of a national economy that has gone through several phases, the lion’s share of ownership becoming ever narrower . . . Levy is an uncommonly lucid interpreter of numbers and theories and a nimble explainer. A rewarding exercise in understanding where we are and how we got there.”—Kirkus Reviews (starred review)