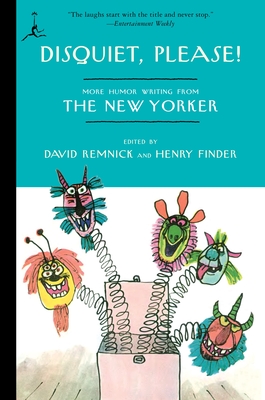 
In Stock—Click for Locations
The New Yorker is, of course, a bastion of superb essays, influential investigative journalism, and insightful arts criticism. But for eighty years it’s also been a hoot. Now an uproarious sampling of its funny writings can be found in this collection, by turns satirical and witty, misanthropic and menacing. From the 1920s onward—but with a special focus on the latest generation—here are the humorists who have set the pace and stirred the pot, pulled the leg and pinched the behind of America. The comic lineup includes Christopher Buckley, Ian Frazier, Veronica Geng, Garrison Keillor, Steve Martin, Susan Orlean, Simon Rich, David Sedaris, Calvin Trillin, and many others. If laughter is the best medicine, Disquiet, Please! is truly a wonder drug.
David Remnick is the editor of The New Yorker.

Henry Finder is the editorial director of The New Yorker.
“The laughs start with the title and never stop.”—Entertainment Weekly

“Some names in this collection elicit laughter upon mention—Woody Allen, Dorothy Parker, E. B. White—but meet some new voices—Simon Rich on free-range chicks, Noah Baumbach on his last relationship in the form of Zagat reviews.”—Chicago Tribune, Editor’s Choice

“Stellar indeed. . . . One of the joys of this collection is seeing how the writers approach a seemingly innocuous idea, then stretch it, shake it and bake it into something completely ridiculous and hilarious.”—Toronto Star