Skywriting: A Life Out of the Blue (Mass Market) 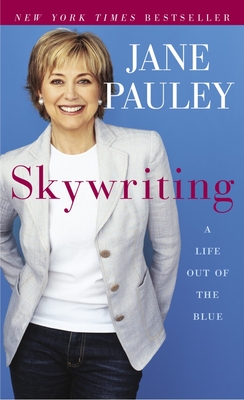 Skywriting: A Life Out of the Blue (Mass Market)


Special Order—Subject to Availability
“Truth arrives in microscopic increments, and when enough has accumulated–in a moment of recognition, you just know. You know because the truth fits. I was the only member of my family to lack the gene for numbers, but I do need things to add up. Approaching midlife, I became aware of a darkening feeling–was it something heavy on my heart, or was something missing? Grateful as I am for the opportunities I’ve had, and especially for the people who came into my life as a result, I couldn’t ignore this feeling. I had the impulse to begin a conversation with myself, through writing, as if to see if my fingers could get to the bottom of it. It was a Saturday morning eight or ten years ago when I began following this impulse to find the answers to unformed questions. Skywriting is what I call my personal process of discovery.”

And so begins this beautiful and surprising memoir, in which beloved broadcast journalist Jane Pauley tells a remarkable story of self-discovery and an extraordinary life, from her childhood in the American heartland to her three decades in television.

Encompassing her beginnings at the local Indianapolis station and her bright debut–at age twenty-five on NBC’s Today and later on Dateline–Pauley forthrightly delves into the ups and downs of a fantastic career. But there is much more to Jane Pauley than just the famous face on TVs. In this memoir, she reveals herself to be a brilliant woman with singular insights. She explores her roots growing up in Indiana and discusses the resiliency of the American family, and addresses with humor and depth a subject very close to her heart: discovering yourself and redefining your strengths at midlife. Striking, moving, candid, and unique, Skywriting explores firsthand the difficulty and the rewards of self-reinvention.


JANE PAULEY began her broadcasting career in 1972 at her hometown Indianapolis station, WISH-TV. She joined NBC in 1975 as the first woman ever to co-anchor a weeknight evening newscast at NBC’s WMAQ-TV in Chicago. She began her thirteen-year tenure on NBC’s Today in 1976. In 1992, NBC News launched the newsmagazine show Dateline NBC, with Pauley as co-anchor. After eleven years, her final appearance aired as the acclaimed special “Jane Pauley: Signing Off.” She is the host of “The Jane Pauley Show.”

Pauley has won many awards, including the Radio-Television News Directors Association’s Paul White Award for her lifetime contribution to electronic journalism and their Leonard Zeidenberg First Amendment Award, and the National Press Foundation’s Sol Taishoff Award for Excellence in Broadcast Journalism. She lives in New York City.