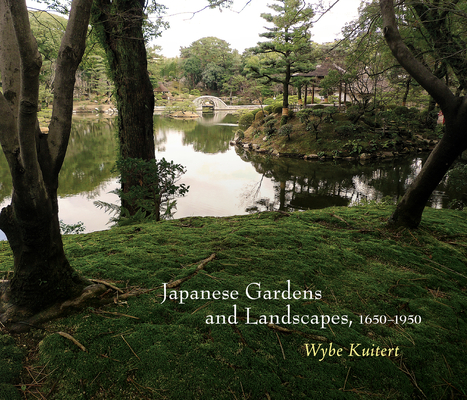 Moss, stone, trees, and sand arranged in striking or natural-looking compositions: the tradition of establishing and refining the landscape has been the work of Japanese gardeners and designers for centuries. In Japanese Gardens and Landscapes, 1650-1950 Wybe Kuitert presents a richly illustrated survey of the gardens and the people who commissioned, created, and used them and chronicles the modernization of traditional aesthetics in the context of economic, political, and environmental transformation.

Kuitert begins in the Edo period (1603-1868), when feudal lords recreated the landscape of the countryside as private space. During this same period, and following Chinese literary models, scholars and men of letters viewed the countryside itself, without any contrivance, as the ideal space in which to meet with friends and have a cup of tea. Stewards of inns, teahouses, and temples, on the other hand, followed increasingly clich d garden designs prescribed in popular, mass-produced pattern books. Over the course of the late nineteenth and early twentieth centuries, the newly wealthy captains of industry in Tokyo adopted the aesthetic of the feudal lords, finding great appeal in naturalistic landscapes and deciduous forests. Confronted with modernization and the West, tradition inevitably took on different meanings. Westerners, seeking to understand Japanese garden culture, found their answers in the pattern-book clich's, while in Japan, private landscapes became public and were designed in environmentally supportable ways, all sponsored by the government. An ancient, esoteric, and elite art extended its reach to every quarter of society, most notably with the extensive rebuilding that occurred in the aftermath of the Tokyo earthquake of 1923 and the end of World War II. In the wake of destruction came a new model for sustainable public parks and a heightened awareness of ecological issues, rooted above all in the natural landscape of Japan. Featuring more than 180 color photographs and reproductions, Japanese Gardens and Landscapes, 1650-1950 illustrates a history of changes and continuities across a span of three centuries and makes an eloquent case for the lessons to be learned from the Japanese tradition as we face the challenges of a rapidly changing human habitat.
Wybe Kuitert is a licensed landscape architect and Professor of Environmental Studies at Seoul National University. He is author of Themes in the History of Japanese Garden Art.