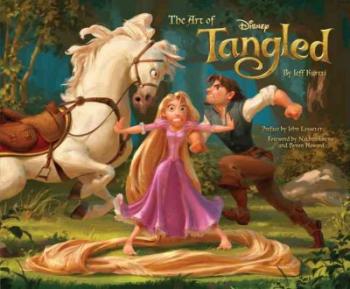 
Not On Our Shelves—Ships in 1-5 Days
A lighthearted twist on Rapunzel, the beloved fairy tale from the Brothers Grimm, Tangled brims with thrilling adventure, a distinctive cast of characters, a daring heroine, and, of course, seventy feet of golden hair. Featuring the stunning concept art behind the newest Disney masterpiece, The Art of Tangled also includes a preface by John Lasseter, a foreword by Directors Nathan Greno and Byron Howard, and interviews with the artists, animators, and production team—including Art Director David Goetz—that shed light on the history and artistry of this landmark film.
Jeff Kurtti is one of the leading authorities on The Walt Disney Company and its history, the author of more than 20 books, a writer-director of award-winning documentaries, and a respected public speaker, host, and panel moderator. A Seattle, Washington native, Kurtti has worked for Walt Disney Imagineering, the theme park design division of The Walt Disney Company, and then for the Corporate Special Projects department of Disney. Since 1995 he has enjoyed a career as an author, writer, and consultant in the motion picture, theatre, and themed-entertainment industries.

John Lasseter is a two-time Academy Award-winning director and the chief creative officer at Pixar and Walt Disney Animation Studios.

Byron Howard, co-director of Tangled, joined the Walt Disney Animation Studios in 1994 and has served as an animator, character designer, and supervising animator for such classic films as Mulan and Lilo & Stitch. He directed Bolt with Chris Williams and later served as an executive producer on the acclaimed 2009 short Super Rhino.

Nathan Greno, co-director of Tangled, joined the Walt Disney Animation Studios in 1996. He served over a decade in the Story Department, and was story supervisor on the film Bolt. Greno wrote and directed the acclaimed 2009 short Super Rhino.