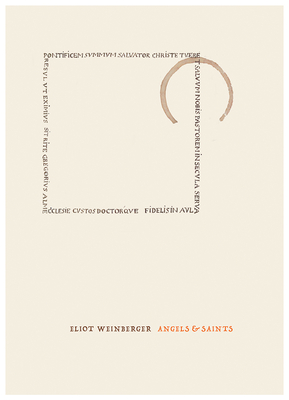 A gorgeously illustrated co-publication with Christine Burgin by “one of the world’s great essayists” (The New York Times). With a guide to the illustrations by Mary Wellesley.

Angels have soared through Western culture and consciousness from Biblical to contemporary times. But what do we really know about these celestial beings? Where do they come from, what are they made of, how do they communicate and perceive? The celebrated essayist Eliot Weinberger has mined and deconstructed, resurrected and distilled centuries of theology into an awe-inspiring exploration of the heavenly host.

From a litany of angelic voices, Weinberger’s lyrical meditation then turns to the earthly counterparts, the saints, their lives retold in a series of vibrant and playful capsule biographies, followed by a glimpse of the afterlife.

Threaded throughout Angels & Saints are the glorious illuminated grid poems by the eighteenth-century Benedictine monk Hrabanus Maurus. These astonishingly complex, proto-“concrete” poems are untangled in a lucid afterword by the medieval scholar and historian Mary Wellesley.

Eliot Weinberger is an essayist, editor, and translator. He lives in New York City.

Dr. Mary Wellesley is a Research Affiliate at the British Library whose research focuses on medieval manuscripts. She writes and reviews widely, her work regularly appearing in the London Review of Books, Daily Telegraph, Times Literary Supplement, among other publications. Her book, Hidden Hands: Manuscripts That Made Us is forthcoming.
A fanciful, wickedly inventive and poignant conjuration. Weinberger has made an infidel’s Book of Hours in an attempt to reinterpret a world that is more alien and insecure by the day, to imagine some things beyond the reach of search engines.
— Marina Warner - London Review of Books

Eliot Weinberger’s Angels and Saints is glorious— a deeply scholarly and playful work, in which the mind of an essayist meets the sensibility of a poet. It is as lovely an object as its subject might require, illustrated by the grid poems of Hrabanus Maurus (circa 780–856), with an additional note on their complexities by Mary Wellesley.

Weinberger delivers a meditation on the nature of angels and saints, illustrated with gorgeous reproductions of the works of ninth century German Benedictine monk Hrabanus Maurus. An interpretation of angels concludes with a beautifully laid out 'angelology,' naming various angels and their powers, such as Mach, who can make one invisible. The rest of the volume is devoted to the stories of saints—some of which are quite lengthy, such as the biography of Saint Therese. Others are as brief as a sentence. (For John the Almsgiver, 'He never spoke an idle word.') Academic and lay readers interested in Christian thought will enjoy Weinberger’s eclectic homage to angels and saints.
— Publishers Weekly (starred)

Like Thomas Aquinas before him, Weinberger is a brilliant scholar in a dark age.
— Rain Taxi

My favorite essayist is Eliot Weinberger. His remarkable breadth of calm concern is impressive.
— Gary Snyder - The New York Times

In Angels & Saints, the beauty of Weinberger’s prose is itself given a visual counterpoint in the multi-colored grid poems of ninth-century Benedictine monk Rabanus Maurus. Each of his sentences thrums with its own vitality. Each subject feels like it’s been granted a second life in text.

Eliot Weinberger is a master essayist, a furious thinker and an exceptionally elegant writer.
— Jenny Diski