The Poems of Octavio Paz (Paperback) 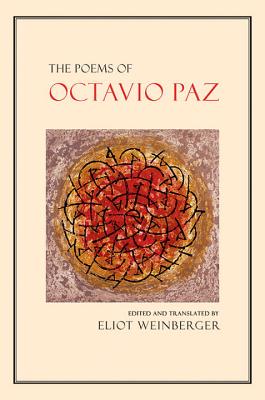 The Poems of Octavio Paz (Paperback)

Now in paperback, the definitive, life-spanning, bilingual edition of the poems by the Nobel Prize laureate

The Poems of Octavio Paz is the first retrospective collection of Paz’s poetry to span his entire writing career from his first published poem, at age seventeen, to his magnificent last poem. This landmark bilingual edition contains many poems that have never been translated into English before, plus new translations based on Paz’s final revisions. Assiduously edited by Eliot Weinberger—who has been translating Paz for over forty years—The Poems of Octavio Paz also includes translations by the poet-luminaries Elizabeth Bishop, Paul Blackburn, Denise Levertov, Muriel Rukeyser, and Charles Tomlinson. Readers will also find Weinberger’s capsule biography of Paz, as well as notes on many poems in Paz’s own words, taken from various interviews he gave throughout his long and singular life.

Octavio Paz (1914-1998) was born in Mexico City. He wrote many volumes of poetry, as well as a prolific body of remarkable works of nonfiction on subjects as varied as poetics, literary and art criticism, politics, culture, and Mexican history. He was awarded the Jerusalem Prize in 1977, the Cervantes Prize in 1981, and the Neustadt Prize in 1982. He received the German Peace Prize for his political work, and finally, the Nobel Prize for Literature in 1990.

Eliot Weinberger is an essayist, editor, and translator. He lives in New York City.

Elizabeth Bishop (February 8, 1911 – October 6, 1979) was an American poet and short-story writer. She was Consultant in Poetry to the Library of Congress from 1949 to 1950, the Pulitzer Prize winner for Poetry in 1956, the National Book Award winner in 1970, and the recipient of the Neustadt International Prize for Literature in 1976.

Paul Blackburn (November 24, 1926–September 13, 1971) was an American poet. He influenced contemporary literature through his poetry, translations and the encouragement and support he offered to fellow poets.

Denise Levertov (1923-1997) was a British born American poet. She wrote and published 20 books of poetry, criticism, translations. She also edited several anthologies. Among her many awards and honors, she received the Shelley Memorial Award, the Robert Frost Medal, the Lenore Marshall Prize, the Lannan Award, a grant from the National Institute of Arts and Letters, and a Guggenheim Fellowship.

Muriel Rukeyser (1913-1980), described by The New York Times as “a brilliant mind fiercely at work,” was the author of several collections of poetry, plays, fiction, three books of biography, children’s stories, a libretto for a musical about Houdini, a book-length manifesto on poetry, and the translator of a wide range of poets, including Octavio Paz and Gunnar Ekelöf.

Charles Tomlinson read English at Queens College, Cambridge, has lived in Northern Italy and London, and has recently retired after thirty-six years of teaching at the University of Bristol. In 1993 he received the Bennett Award for achievement in literature from The Hudson Review of New York, and in 1991 the Premio Europeo di Cittadella. He is the editor of the classic anthology The Oxford Book of Verse in English Translation. He lives in Gloucester, England.
Readers will marvel at Paz’s variety: haiku-like miniatures; the tempestuous
book-length poem ‘Sunstone’; fast-moving prose poems; abstract odes; extended descriptions of places in Mexico, India, Afghanistan, and Japan.
— Publishers Weekly

The question of who or what writes a poem, which agency creates which
pieces, even if none of the players is exactly automatic, takes us a long way
into Paz’s work, handsomely represented in this new collection.
— Michael Wood - The London Review of Books

The living conscience of his age.
— Mario Vargas Llosa