Improvisation for the Theater: A Handbook of Teaching and Directing Techniques (Paperback) 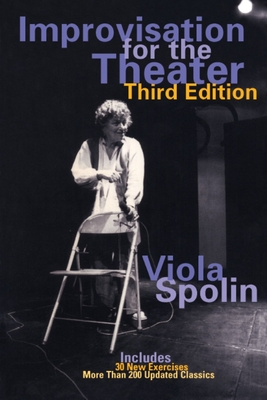 Improvisation for the Theater: A Handbook of Teaching and Directing Techniques (Paperback)


Not On Our Shelves—Ships in 1-5 Days
Here is the thoroughly revised third edition of the bible of improvisational theater.

Viola Spolin's improvisational techniques changed the very nature and practice of modern theater. The first two editions of Improvisation for the Theater sold more than 100,000 copies and inspired actors, directors, teachers, and writers in theater, television, film. These techniques have also influenced the fields of education, mental health, social work, and psychology.
VIOLA SPOLIN, the originator of theater games, was introduced to the use of games, storytelling, folk dance, and dramatics as tools for stimulating creative expression in the 1920s while a student of Neva Boyd at Chicago's Hull House. During her years as a teacher and supervisor of creative dramatics there, she began to develop her nonverbal, nonpsychological approach. Her books have been translated into Swedish, German, and Portuguese. She died in 1994.

PAUL SILLS is Viola Spolin's son and the founding director of Chicago's Second City and of Story Theater. He is the coeditor of the third edition of Improvisation for the Theater.
"Her book is the bible." —Rob Reiner

"It's like basic research . . . she [has] changed the theater for generations." —Alan Alda

"She has genius and shares it." —Valerie Harper