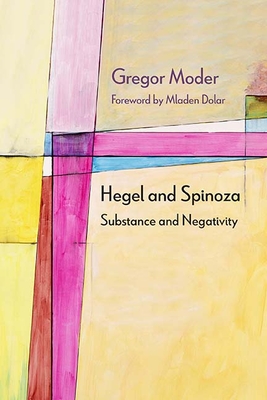 
Special Order—Subject to Availability
Gregor Moder’s Hegel and Spinoza: Substance and Negativity is a lively entry into current debates concerning Hegel, Spinoza, and their relation. Hegel and Spinoza are two of the most influential philosophers of the modern era, and the traditions of thought they inaugurated have been in continuous dialogue and conflict ever since Hegel first criticized Spinoza. Notably, eighteenth- and nineteenth-century German Idealists aimed to overcome the determinism of Spinoza’s system by securing a place for the freedom of the subject within it, and twentieth-century French materialists such as Althusser and Deleuze rallied behind Spinoza as the ultimate champion of anti-Hegelian materialism. This conflict, or mutual rejection, lives on today in recent discussions about materialism. Contemporary thinkers either make a Hegelian case for the productiveness of concepts of the negative, nothingness, and death, or in a way that is inspired by Spinoza they abolish the concepts of the subject and negation and argue for pure affirmation and the vitalistic production of differences.

GREGOR MODER is an assistant professor on the Faculty of Arts at the University of Ljubljana.
"With exemplary clarity and striking originality, Moder shows us how to think Hegel and Spinoza together again, at last. His book will make a signal contribution to current philosophical debates and could become a classic commentary." —Nathan Brown, author of The Limits of Fabrication: Materials Science, Materialist Poetics
"In Gregor Moder's latest book Hegel and Spinoza: Substance and Negativity, what we find, page after page, goes way beyond the dry presentation of this issue through the history of epistemology, offering an exhilarating investigation of its theoretical importance. As a responsibly technical work, Moder presents the tension between both positions of this battlefield through engaging to all possible combinations of this clash of Titans: Hegel and Spinoza of the title, encompasses the troubles of presenting the tension of Spinoza and Hegel, Spinoza or Hegel, Hegel vs. Spinoza or perhaps, Spinoza vs.Hegel... Each chapter of the book reveals additional layers of complexity to this inevitable and interesting tension; already at the Introduction we can sense the tone of this breathtaking theoretical discussion. Needless to say that this is an accomplishment only reached through the articulate and beautifully written construction of the book." —Continental Thought & Theory


“Hegel and Spinoza is a serious book by a gifted and insightful thinker.”
—Richard Boothby, author of Sex On The Couch: What Freud Still Has to Teach Us About Sex and Gender and Freud As Philosopher: Metapsychology After Lacan

“Philosophy famously has no beginning, but on the question of Hegel and Spinoza, one must now start with Gregor Moder’s book. Hegel and Spinoza is a lucid and important contribution to contemporary theory—and best of all, it is refreshingly original in the way it deals with everything from first principles to the enormous influence of both thinkers over the centuries. Moder brilliantly reframes the entire conversation about what Hegel read into, and out of, Spinoza, and he provides memorably new readings of both philosophers in their own right.” —Andrew Cole, author of The Birth of Theory