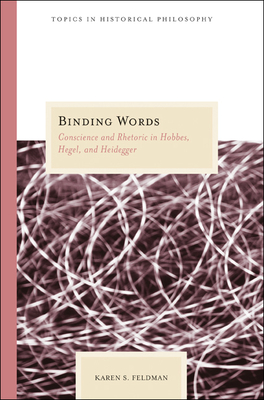 
Special Order—Subject to Availability
In a provactive work that brings new tools to the history of philosophy, Karen S. Feldman offers an elegant account of how philosophical language appears to produce the very thing it claims to describe. She demonstrates that conscience can only be described and understood through tropes and figures of langugae. If description in literal terms is impossible, as Binding Words convincingly argues, perhaps there is no such thing. But if the word "conscience" has no tangible referent, then how can conscience be constructed as binding? Does our conscience move us to do things, or is this yet another figure of speech?

Hobbes's Leviathan, Hegel's Phenomenology of Spirit, and Heidegger's Being and Time dramatize conscience's relation to language and knowledge, morality and duty, and ontology. Feldman investigates how, within these works, conscience is described as binding upon us while at the same time asking how texts themselves may be read as binding.
Karen S. Feldman is a lecturer in the departments of rhetoric and German at the University of California, Berkeley.

"A brilliant consideration of the relationship between performativity and conscience, Binding Words is a tour de force, written with admirable lucidity, vitality, imagination, and originality. It is at once rhetorical and philosophical, full of vibrant and unexpected readings."