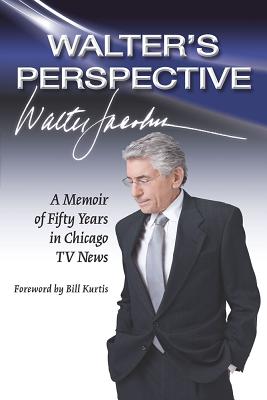 This highly readable book provides a unique glimpse into the rough-and-tumble Chicago news business as seen through the eyes of one of its legendary players. From his first news job working as a legman for Daily News columnist Jack Mabley in the 1950s to his later role as a news anchor and political commentator at CBS-owned WBBM, Walter Jacobson battled along the front lines of an industry undergoing dramatic changes. While it is ultimately Jacobson’s story, a memoir of a long and distinguished (and sometimes highly controversial) career, it is also an insider’s account of the inner workings of Chicago television news, including the ratings games, the process of defining news and choosing stories, the media’s power and its failures, and the meddling by corporate and network executives.

As a reporter, Jacobson was regularly contentious and confrontational. He was fired on a number of occasions and was convicted of libeling tobacco company Brown and Williamson, resulting in a multimillion-dollar federal court judgment against him and CBS. Yet it was this gutsy attitude that put him at the top of the news game. With an engaging writing style, Jacobson recollects his interactions with Chicago mayors Richard J. and Richard M. Daley, Jane Byrne, Harold Washington, and Rahm Emanuel; recounts his coverage of such fascinating news stories as the violent 1968 Democratic National Convention and the execution of convicted mass murderer John Wayne Gacy; and recalls his reporting on and interviews with Louis Farrakhan, governors George Ryan and Rod Blagojevich, and Barack Obama. More than a memoir, Walter’s Perspective is the extraordinary journey of one reporter whose distinctive career followed the changing face of Chicago’s local news.

Celebrated anchor, investigative reporter, and political commentator, Walter Jacobson has won more than forty Emmys for his reporting and commentaries on three different television stations, CBS-WBBM, NBC-WMAQ, and Fox-WFLD—more than have been won by all the anchors in the history of Chicago combined.
“Readers will love the sweep of this memoir, one written with a winning voice and perspective.”—Chicago Tribune

“Stylishly written, the book is a hard-eyed look at what has happened to what we call news during [Jacobson’s] many years in the game, something we viewers rarely, if ever, have time to contemplate in the rush and hustle of the next lead story or the 24-hour news cycle.”—Printers Row Journal