The 9/11 Report: A Graphic Adaptation (Paperback) 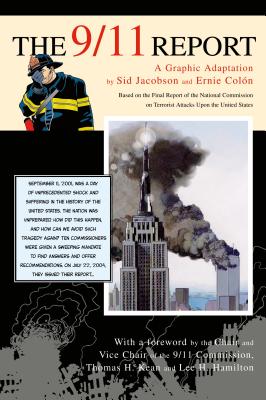 The 9/11 Report: A Graphic Adaptation (Paperback)

Decades after the deadliest terrorist attack on the United States, an event that left no aspect of American foreign or domestic policy untouched, The 9/11 Report: A Graphic Adaptation, offers an accessible account of the most defining event of the century.

On December 5, 2005, the 9/11 Commission issued its final report card on the government's fulfillment of the recommendations issued in July 2004: one A, twelve Bs, nine Cs, twelve Ds, three Fs, and four incompletes. Here is stunning evidence that Sid Jacobson and Ernie Colón, with more than sixty years of experience in the comic-book industry between them, were right: far, far too few Americans have read, grasped, and demanded action on the Commission's investigation into the events of that tragic day and the lessons America must learn.

Using every skill and storytelling method Jacobson and Colón have learned over the decades, they have produced the most accessible version of the 9/11 Report. Jacobson's text frequently follows word for word the original report, faithfully captures its investigative thoroughness, and covers its entire scope, even including the Commission's final report card. Colón's stunning artwork powerfully conveys the facts, insights, and urgency of the original.

For more than thirty years, Sid Jacobson (1929-2022) was the managing editor and editor in chief for Harvey Comics, the publisher of Casper the Friendly Ghost and Wendy the Good Little Witch, where he created the character of Richie Rich. He was also an executive editor at Marvel Comics for the Star Comics imprint, which published Ewoks and Muppet Babies among other licensed and original titles.
Jacobson was also a prolific songwriter of more than 100 songs, including the top ten hit “The End”, sung by Earl Grant, and Gary Cane and His Friends’ “Yen Yet”, which was featured on Captain Kangaroo.

The author of the novels Streets of Gold and Another Time, with Harvey Comics artist Ernie Colón he created the New York Times bestsellers The 9/11 Report: A Graphic Adaptation and Anne Frank: The Anne Frank House Authorized Graphic Biography.

Ernie Colón (1931-2019) is the illustrator of the New York Times bestseller The 9/11 Report: A Graphic Adaptation, After 9/11, Che, and Anne Frank (all published by Hill and Wang). He has worked at Marvel Comics, where he oversaw the production of Spider-Man, and at DC Comics, where he did the same for Green Lantern, Wonder Woman, Blackhawk, and the Flash.
"Striking fold-outs chronicle in parallel the four simultaneous stories of the doomed flights, and the twelve chapters provide plenty of details and analysis on the history, politics, economics, procedural issues, and recommendations for the future. The excellent color artwork gives a realistic face to all players: presidents, victims, rescuers, and hijackers alike." —Library Journal