The Beats: A Graphic History (Paperback) 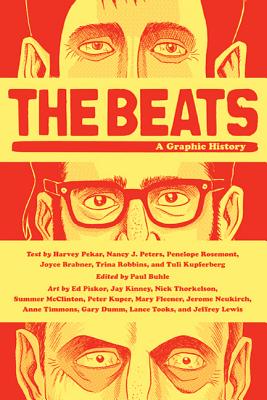 The Beats: A Graphic History (Paperback)

In The Beats: A Graphic History, those who were mad to live have come back to life through artwork as vibrant as the Beat movement itself. Told by the comic legend Harvey Pekar, his frequent artistic collaborator Ed Piskor, and a range of artists and writers, including the feminist comic creator Trina Robbins and the Mad magazine artist Peter Kuper, The Beats takes us on a wild tour of a generation that, in the face of mainstream American conformity and conservatism, became known for its determined uprootedness, aggressive addictions, and startling creativity and experimentation.

What began among a small circle of friends in New York and San Francisco during the late 1940s and early 1950s laid the groundwork for a literary explosion, and this striking anthology captures the storied era in all its incarnations—from the Benzedrine-fueled antics of Kerouac, Ginsberg, and Burroughs to the painting sessions of Jay DeFeo's disheveled studio, from the jazz hipsters to the beatnik chicks, from Chicago's College of Complexes to San Francisco's famed City Lights bookstore. Snapshots of lesser-known poets and writers sit alongside frank and compelling looks at the Beats' most recognizable faces. What emerges is a brilliant collage of—and tribute to—a generation, in a form and style that is as original as its subject.

Harvey Pekar is the coauthor of Not the Israel My Parents Promised Me (Hill and Wang, 2012) and is best known for his graphic autobiography, American Splendor, which was based on his long-running comic-book series and adapted into a film of the same name. He died in 2010.

Paul Buhle is a senior lecturer in history at Brown University and the editor of the Encyclopedia of the American Left, among other books. He lives in Providence, Rhode Island.

Ed Piskor illustrated The Beats from Farrar, Straus and Giroux.

“Editor Paul Buhle's graphic history The Beats--with riffs from cats such as Harvey Pekar and Trina Robbins--burns like a Roman candle.” —Vanity Fair

“The Beats is as fresh and pertinent as the latest scholarly history, only far more entertaining.” —Studs Terkel

“A new angle on a familiar story . . . [The Beats] gives the hipsters back their body language. In a book that is largely about license and the enlightened rebel, it is easy to find reflections of both in the graphic form.” —John Leland, The New York Times Book Review

“Eye-catching . . . An illustrated look back at a very real part of American pop-culture history, when beat culture of the '40s and '50s--sandwiched between the improvisational nature of jazz and the recklessness of rock 'n' roll--began to speak to a part of a generation at odds with mainstream society. One word sums it up: Cool.” —Cary Darling, Fort Worth Star-Telegram

“The Beats: A Graphic History is everything a radical history should be: critical, admiring, quirky and apologetic . . . From cover to cover, The Beats is a wonderful history of a complicated and misunderstood cultural movement--its achievements, its place in history, its flaws and its brilliance. The graphic novel format is perfect for the subject--straddling the line between respectability and disreputableness just as the Beats themselves did.” —Cory Doctorow, BoingBoing

“History with a deeper perspective . . . This fearless, substantial history entertains as it uncovers.” —Carlo Wolff, The Boston Globe

“This lively graphic history spotlights the 1950s youth revolt that said no to conformity and opened the way to a new world of unfettered imagination.” —Franklin Rosemont, cofounder of the Chicago Surrealist Group

“Capturing the flavor of that poetic era with style and wit, The Beats is a slice of countercultural history that's enhanced by its unique visual format.” —Paul Krassner, author of One Hand Jerking: Reports from an Investigative Satirist

“This graphic history has a grittiness and attention to difficult anecdote that brings a classic American romantic venture, with all its deviant sexual and economic ‘crazy wisdom,' down to the gritty realism of pen-and-ink earth.” —Edward Sanders, author of America: A History in Verse

“At its best, which is quite good indeed, The Beats reflects the creative energy of the movement it chronicles.” —Peter Gutiérrez, Graphic Novel Reporter

“The Beats serves to introduce an American cultural phenomenon to a new audience while giving some of its less well-known players fresh exposure . . . The comics celebrate the individuals that made up the anti-establishment of the times and whose art and social action outlives them. The stories are drawn by an eclectic mix of cartoonists and told by characters--including Pekar--every bit as individualistic as their subjects.” —Cabbage Rabbit, Cabbage Rabbit Review of Books & Music

“A well-informed, engaging, and dynamic presentation of the core precursors and descendants of the Beat ethos in both literary and popular American life . . . Belongs in every library where any Beat literature has a home. This is a perfect gateway to both the art and the era for today's teens to access the Beat world.” —Francisca Goldsmith, School Library Journal