Beyond Bogota: Diary of a Drug War Journalist in Colombia (Paperback) 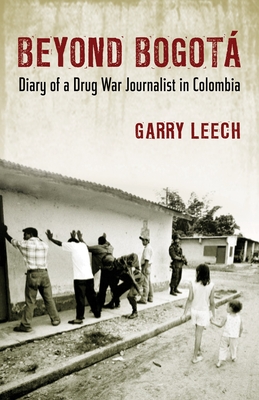 Beyond Bogota: Diary of a Drug War Journalist in Colombia (Paperback)


Not On Our Shelves—Ships in 1-5 Days
Independent journalist Garry Leech has spent the last eight years working in the most remote and dangerous regions of Colombia. Unlike other Western reporters, most of whom rarely leave Bogotá, Leech learns the truth about conflicts and the U.S. war on drugs directly from the source: farmers, male and female guerrillas, union organizers, indigenous communities, and many others.

Beyond Bogotá is framed around the eleven hours that Leech was held captive by the FARC, Colombia's largest leftist guerrilla group, in August 2006. Drawing on unprecedented access to soldiers, guerrillas, paramilitaries, and peasants in conflict zones and cocaine-producing areas, Leech's documentary memoir is an epic tale of a journalist's search for meaning in the midst of violence and poverty. This compelling account provides fresh insights into U.S. foreign policy, the role of the media, and the plight of everyday Colombians caught in the middle of a brutal war.
Garry Leech is an independent journalist and editor of Colombia Journal. For the past eight years his work has primarily focused on the US war on drugs and Colombia's civil conflict. He is the author of several books including Beyond Bogota: Diary of a Drug War Journalist in Colombia, Crude Interventions: The United States, Oil and the New World (Dis)Order, Capitalism: A Structural Genocide and How I Became an American Socialist. Find him online at www.garryleech.com.
Eye-opening . . . excellent reportage—highly recommended for would-be journalists as well as those interested in geopolitics.—Kirkus Reviews

"In this remarkable saga, Garry Leech conveys brilliantly and with vivid insight the magical qualities of this rich and tortured land, and the struggles and torment of its people."—Noam Chomsky

"That havoc within Colombia is portrayed with angry passion by the determined Garry Leech, that now rare beast in the jungle of journalism prepared to put his own life at the service of the truth. . . . A remarkable and captivating personal account of the drug war that unfolds mostly in Colombia.—Gavin O'Toole, Latin American Review of Books