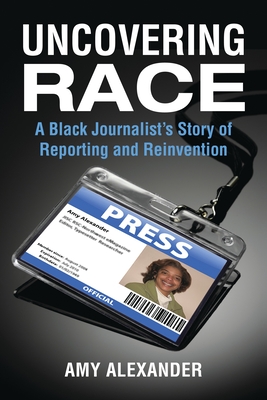 
Not On Our Shelves—Ships in 1-5 Days
From an award-winning black journalist, a tough-minded look at the treatment of ethnic minorities both in newsrooms and in the reporting that comes out of them, within the changing media landscape.

From the Rodney King riots to the racial inequities of the new digital media, Amy Alexander has chronicled the biggest race and class stories of the modern era in American journalism. Beginning in the bare-knuckled newsrooms of 1980s San Francisco, her career spans a period of industry-wide economic collapse and tremendous national demographic changes.

Despite reporting in some of the country’s most diverse cities, including San Francisco, Boston, and Miami, Alexander consistently encountered a stubbornly white, male press corps and a surprising lack of news concerning the ethnic communities in these multicultural metropolises. Driven to shed light on the race and class struggles taking place in the United States, Alexander embarked on a rollercoaster career marked by cultural conflicts within newsrooms. Along the way, her identity as a black woman journalist changed dramatically, an evolution that coincided with sweeping changes in the media industry and the advent of the Internet.

Armed with census data and news-industry demographic research, Alexander explains how the so-called New Media is reenacting Old Media’s biases. She argues that the idea of newsroom diversity—at best an afterthought in good economic times—has all but fallen off the table as the industry fights for its economic life, a dynamic that will ultimately speed the demise of venerable news outlets. Moreover, for the shrinking number of journalists of color who currently work at big news organizations, the lingering ethos of having to be “twice as good” as their white counterparts continues; it is a reality that threatens to stifle another generation of practitioners from “non-traditional” backgrounds.

In this hard-hitting account, Alexander evaluates her own career in the context of the continually evolving story of America’s growing ethnic populations and the homogenous newsrooms producing our nation’s too often monochromatic coverage. This veteran journalist examines the major news stories that were entrenched in the great race debate of the past three decades, stories like those of Elián González, Janet Cooke, Jayson Blair, Tavis Smiley, the tragedy of Hurricane Katrina, and the election of Barack Obama.

Uncovering Race offers sharp analysis of how race, gender, and class come to bear on newsrooms, and takes aim at mainstream media’s failure to successfully cover a browner, younger nation—a failure that Alexander argues is speeding news organizations’ demise faster than the Internet.
Amy Alexander is an award-winning content producer. The 2008 Alfred Knobler Fellow at the Nation Institute, she has contributed to many prominent publications, including the Miami Herald, Boston Globe, Village Voice, Washington Post, and the Nation. She has also written for Salon.com and TheRoot.com, and was associate producer of NPR’s Tell Me More, with Michel Martin. Her three previous books include Lay My Burden Down, coauthored with Alvin Poussaint, MD. She lives in Silver Spring, Maryland.
“Amy Alexander writes with the precision of the seasoned journalist she is and the expansiveness of the wise cultural critic she has become. Her book is at once a trenchant look at the competitive world of the highest reaches of journalism and an on-the-ground narrative of the transformations in the ways we understand race, identity, and work. Her experience is unique, but her perspective is universal.”─Henry Louis Gates Jr., author of Colored People

“Amy Alexander has done it! A gifted storyteller . . . she has written the essential memoir for journalists of color. . . . A powerful and irresistible narrative that introduces us to one of the most important African American journalists in the United States and helps us better understand the world of print and online journalism.”—Ruben Navarrette Jr., author of A Darker Shade of Crimson

“In wrestling with two difficult subjects—the challenges faced historically by people of color in the American news media, and the recent usurpation of traditional journalism by the Internet—Alexander writes with a clearly felt sense of passion and urgency, and she thoughtfully discusses key events of the last few decades, such as the Rodney King incident and its aftermath and the questionable role of media stars during traumatic events such as Hurricane Katrina and the Haiti earthquake.”—Kirkus Reviews

"A timely and compelling look at issues of race and lack of diversity that have dogged America's newsrooms for generations."—Tananarive Due, American Book Award winner

“Amy Alexander's analysis of the damage done to public awareness and understanding throughout the 20th century because of the failure of traditional journalism to adequately integrate staff could not come at a better time. It reminds consumers today that though they now have access to an integrated rainbow of sources of news online the responsibility now shifts to them to integrate the sources of news and opinion they aggregate.”—Bill Kovach, author of The Elements of Journalism: What Newspeople Should Know and The Public Should Expect