Poor Richard's Women: Deborah Read Franklin and the Other Women Behind the Founding Father (Hardcover) 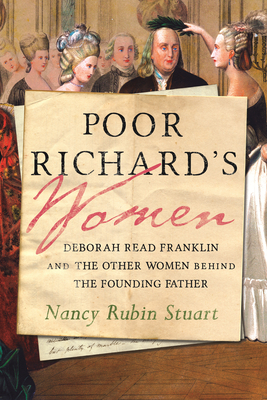 Poor Richard's Women: Deborah Read Franklin and the Other Women Behind the Founding Father (Hardcover)


On Our Shelves Now at:
“An engrossing look at the human side of Benjamin Franklin . . . Using a post-feminist lens that’s critical of gender essentialism, Stuart rescues these women from obscurity . . . This is a terrific read: poignant, provocative, and probing.”
—Library Journal, Starred Review

A vivid portrait of the women who loved, nurtured, and defended America’s famous scientist and founding father.

Everyone knows Benjamin Franklin—the thrifty inventor-statesman of the Revolutionary era—but not about his love life. Poor Richard’s Women reveals the long-neglected voices of the women Ben loved and lost during his lifelong struggle between passion and prudence. The most prominent among them was Deborah Read Franklin, his common-law wife and partner for 44 years. Long dismissed by historians, she was an independent, politically savvy woman and devoted wife who raised their children, managed his finances, and fought off angry mobs at gunpoint while he traipsed about England.

Weaving detailed historical research with emotional intensity and personal testimony, Nancy Rubin Stuart traces Deborah’s life and those of Ben’s other romantic attachments through their personal correspondence. We are introduced to Margaret Stevenson, the widowed landlady who managed Ben’s life in London; Catherine Ray, the 23-year-old New Englander with whom he traveled overnight and later exchanged passionate letters; Madame Brillon, the beautiful French musician who flirted shamelessly with him, and the witty Madame Helvetius, who befriended the philosophes of pre-Revolutionary France and brought Ben to his knees.

What emerges from Stuart’s pen is a colorful and poignant portrait of women in the age of revolution. Set two centuries before the rise of feminism, Poor Richard’s Women depicts the feisty, often-forgotten women dear to Ben’s heart who, despite obstacles, achieved an independence rarely enjoyed by their peers in that era.
Nancy Rubin Stuart is an award-winning author and journalist whose eight nonfiction books focus upon women and social history. Her most recently published works include Defiant Brides: The Untold Story of Two Revolutionary-Era Women and the Radical Men They Married and The Muse of the Revolution: The Secret Pen of Mercy Otis Warren and the Founding of a Nation. A former journalist, Stuart has written for the New York Times, Huffington Post, the New England Quarterly, and national magazines. She serves as executive director of the Cape Cod Writers Center. Connect with her at nancyrubinstuart.com.
“An engrossing look at the human side of Benjamin Franklin . . . Using a post-feminist lens that’s critical of gender essentialism, Stuart rescues these women from obscurity . . . This is a terrific read: poignant, provocative, and probing.”
—Library Journal, Starred Review

“This readable, well-researched book will appeal to those interested in the unruly intimate life of archrationalist Franklin as well as students of the too-often-ignored roles of women in the historical record. A revealing document about early American history.”
—Kirkus Reviews

“A fresh perspective on Benjamin Franklin in this revealing study of his relationships with women . . . Stuart paints a nuanced portrait of Deborah and the other women in Franklin’s life, briskly recounts the highlights of his long and varied career, and incisively analyzes the era’s gender dynamics. American history buffs will be fascinated.”
—Publishers Weekly

“Poor Richard’s Women add[s] nuance and context to the life of a man who appears to have valued the intellectual capabilities and wit of women while also being confounded by them.”
—Old Colony Memorial

“A delightful addition to biographies and bookshelves everywhere.”
—Colonial Review

“Poor Richard’s Women is a thoughtful and probing look at the love life of one of our most prominent founding fathers. Stuart’s impeccable research and   entertaining writing provide an eminently satisfying read that is both illuminating and balanced without falling prey to the salacious gossip of the day that ensnared other historians.”
—Providence Journal

“Ben Franklin, our enigmatic founding father, continues to fascinate, and in Poor Richard’s Women, Nancy Rubin Stuart gives the women in his life their due, showing them as real persons, with both limitations and achievements, rather than the pathetic, laughable figures so often described in books about him. Poor Richard’s Women is a treat for anyone interested in women of his time or Ben himself.”
—Betty Boyd Caroli, author of Lady Bird and Lyndon: The Hidden Story of a Marriage That Made a President

“Nancy Rubin Stuart highlights a side of Ben Franklin too often ignored by historians. . . . Stuart uncovers a man often dependent upon women’s care and support, a man eager to be loved, and a man driven by passions as much as by politics and science. Poor Richard’s Women fills in the blanks of the life we’ve known this founding father to live and provides a necessary reminder that the women who came into his life are as deserving of our attention as Ben himself.”
—Carol Berkin, author of Revolutionary Mothers: Women in the Struggle for America’s Independence

“Poor Richard’s Women is narrative history at its best, as it offers compelling insights into the character of Benjamin Franklin. Nancy Rubin Stuart rescues Franklin’s women from the margins, making them central to our understanding of a man who fought a never-ending internal battle between ‘prudence and passion.’ Engaging and fascinating, Poor Richard’s Women is a must-read for anyone looking to learn more about the man they thought they knew.”
—Sheila Skemp, author of The Making of a Patriot: Benjamin Franklin at the Cockpit

“[A] fascinating and fast-paced new look at the life of Benjamin Franklin, as told through the colorful prism of the women around him. Nancy Rubin Stuart explores his longest relationships, his fleeting infatuations, and everything in between. She shines a fresh light on old Ben while giving us a new appreciation for the women, who live and breathe in these pages as they haven’t since the eighteenth century. A refreshing read.”
—William Martin, author of Citizen Washington and December ’41