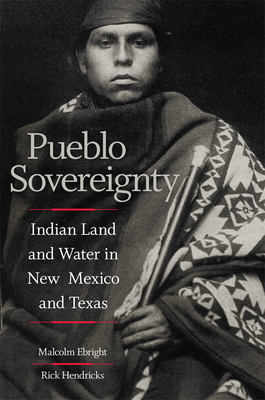 Over five centuries of foreign rule-by Spain, Mexico, and the United States-Native American pueblos have confronted attacks on their sovereignty and encroachments on their land and water rights. How five New Mexico and Texas pueblos did this, in some cases multiple times, forms the history of cultural resilience and tenacity chronicled in Pueblo Sovereignty by two of New Mexico's most distinguished legal historians, Malcolm Ebright and Rick Hendricks.

Extending their award-winning work Four Square Leagues, Ebright and Hendricks focus here on four New Mexico Pueblo Indian communities-Pojoaque, Nambe, Tesuque, and Isleta-and one now in Texas, Ysleta del Sur. The authors trace the complex tangle of conflicting jurisdictions and laws these pueblos faced when defending their extremely limited land and water resources. The communities often met such challenges in court and, sometimes, as in the case of Tesuque Pueblo in 1922, took matters into their own hands. Ebright and Hendricks describe how-at times aided by appointed Spanish officials, private lawyers, priests, and Indian agents-each pueblo resisted various non-Indian, institutional, and legal pressures; and how each suffered defeat in the Court of Private Land Claims and the Pueblo Lands Board, only to assert its sovereignty again and again.

Although some of these defenses led to stunning victories, all five pueblos experienced serious population declines. Some were even temporarily abandoned. That all have subsequently seen a return to their traditions and ceremonies, and ultimately have survived and thrived, is a testimony to their resilience. Their stories, documented here in extraordinary detail, are critical to a complete understanding of the history of the Pueblos and of the American Southwest.