Bud Wilkinson and the Rise of Oklahoma Football (Hardcover) 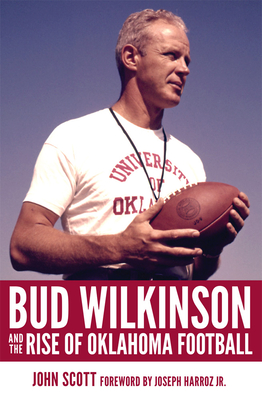 Bud Wilkinson and the Rise of Oklahoma Football (Hardcover)


In Stock—Click for Locations
At the end of World War II, the top ten college football teams were largely the same as they are today--with one exception: Oklahoma. In 1947, Bud Wilkinson was named OU's head football coach and became the architect of Oklahoma's meteoric rise from mediocrity to its present status as a perennial powerhouse. Based on interviews with Wilkinson, former OU president George L. Cross, and numerous former players, author John Scott gives us the behind-the-scenes story of Wilkinson's years at the University of Oklahoma. Scott takes us through the teams Wilkinson directed from 1947 to 1963, revealing the philosophies and tactics Wilkinson used to turn OU into one of college football's elite programs. A close-up view of games--from strategy to execution--brings OU football and its cast of colorful characters to life. Scott details the Sooners' 47-game winning streak as well as thrilling games against Notre Dame, Army, USC, and others. He also provides details of Wilkinson's breaking of the color line in OU athletics and the infamous food-poisoning incident in Chicago in 1959. Before his death in 1994, Wilkinson reviewed the first draft of the book and wrote in a letter to the author, "The explanations of football strategies are concise and clear. They rank among the best I have ever read." Including vignettes of Wilkinson's closest coaching friends (Royal, Bryant, Leahy, Sanders, Blaik, Tatum), Bud Wilkinson and the Rise of Oklahoma Football captures all the drama of Oklahoma's ascendance and serves as an authoritative and entertaining history of the sport that will appeal to all college football fans.