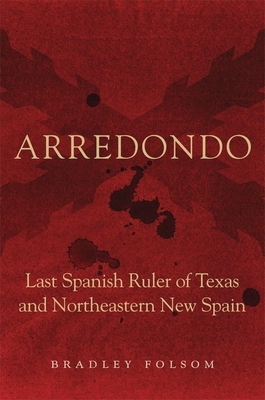 
Not On Our Shelves—Ships in 1-5 Days
In this biography of Joaqu n de Arredondo, historian Bradley Folsom brings to life one of the most influential and ruthless leaders in North American history. Arredondo (1776-1837), a Bourbon loyalist who governed Texas and the other interior provinces of northeastern New Spain during the Mexican War of Independence, contended with attacks by revolutionaries, U.S. citizens, generals who had served in Napoleon's army, pirates, and various American Indian groups, all attempting to wrest control of the region. Often resorting to violence to deal with the provinces' problems, Arredondo was for ten years the most powerful official in northeastern New Spain. Folsom's lively account shows the challenges of governing a vast and inhospitable region and provides insight into nineteenth-century military tactics and Spanish viceregal realpolitik. When Arredondo and his army--which included Arredondo's prot g , future president of Mexico Antonio L pez de Santa Anna--arrived in Nuevo Santander in 1811, they quickly suppressed a revolutionary upheaval. Arredondo went on to expel an army of revolutionaries and invaders from the United States who had taken over Texas and declared it an independent republic. In the Battle of Medina, the bloodiest battle ever fought in Texas, he crushed the insurgents and followed his victory with a purge that reduced Texas's population by half. Over the following eight years, Arredondo faced fresh challenges to Spanish sovereignty ranging from Comanche and Apache raids to continued American incursion. In response, Arredondo ignored his superiors and ordered his soldiers to terrorize those who disagreed with him. Arredondo's actions had dramatic repercussions in Texas, Mexico, and the United States. His decision to allow Moses Austin to colonize Texas with Americans would culminate in the defeat of Santa Anna in 1836, but not before Santa Anna had made good use of the lessons in brutality he had learned so well from his mentor.