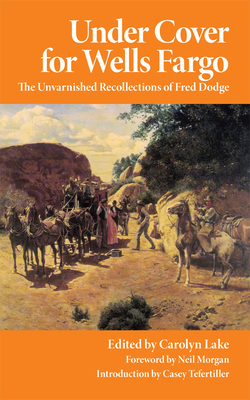 These are the remarkable memoirs of Fred Dodge (1854-1938), Wells Fargo secret agent for fifty years, friend of Wyatt Earp, and fast man with a gun. Here are dozens of his cases--stage robberies, train holdups, long pursuits through the badlands, even suits against Wells Fargo for delay to a corpse and the bite of a vicious horse. In Under Cover for Wells Fargo his unvarnished recollections are preserved and carefully edited by Carolyn Lake, who discovered Dodge's journals among Stuart N. Lake's papers, awaiting a biography that was never written.

Fred Dodge was a dead ringer for Morgan Earp, and this led to his early acquaintance with the famous brothers. In those days Dodge was posing as a gambler, and even Wyatt did not know that he was a Wells Fargo agent. Dodge sheds much light on the Earps in Tombstone and on how he teamed up with Heck Thomas to hunt down outlaws in Kansas and Oklahoma, including Bill Doolin's gang and the Dalton brothers.