Catch a Fire: The Life of Bob Marley (Paperback) 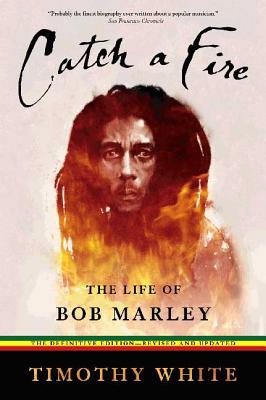 Catch a Fire: The Life of Bob Marley (Paperback)

The classic biography of reggae legend Bob Marley, updated and revised for the twenty-fifth anniversary of his death

Bob Marley left an indelible mark on modern music, both as a reggae pioneer and as an enduring cultural icon. Catch a Fire, now a classic of rock biography, delves into the life of the leader of a musical, spiritual, and political explosion that continues today.

Under the supervision of the author's widow and with the collaboration of a Marley expert, this fourth edition contains a wealth of new material on the Jamaican singer, songwriter and musician , including many revisions made by the author before his untimely death. An appendix to the new edition chronicles Marley's legacy in recent years, as well as the ongoing controversy over the possibility that Marley's remains might be exhumed from Nine Mile, Jamaica, and reburied in Addis Ababa, Ethiopia, where hundreds of Rastafarians live. The new edition also contains an expanded discography and is factually updated throughout.

"Probably the finest biography ever written about a popular musician." —San Francisco Chronicle

"As close as rock journalism comes to transcendent literature."
—Playboy

One of the most prominent music journalists of the twentieth century, Timothy White wrote extensively on Marley, reggae, and Caribbean music and culture for Rolling Stone, The New York Times, and other leading publications. His close contact with Marley and his family and inner circle of friends led to White being granted access to private papers, photographs, and memorabilia. White died in 2002.