Age of Propaganda: The Everyday Use and Abuse of Persuasion (Paperback) 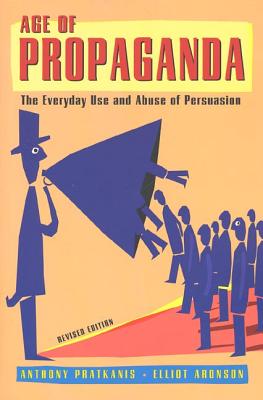 Age of Propaganda: The Everyday Use and Abuse of Persuasion (Paperback)

Americans create 57% of the world's advertising while representing only 6% of its population; half of our waking hours are spent immersed in the mass media. Persuasion has always been integral to the democratic process, but increasingly, thoughtful discussion is being replaced with simplistic soundbites and manipulative messages.

Drawing on the history of propaganda as well as on contemporary research in social psychology, Age of Propaganda shows how the tactics used by political campaigners, sales agents, advertisers, televangelists, demagogues, and others often take advantage of our emotions by appealing to our deepest fears and most irrational hopes, creating a distorted vision of the world we live in.

Anthony Pratkanis is professor of psychology at the University of California, Santa Cruz.

Elliot Aronson is one of our nation's most eminent social psychologists. He is professor emeritus at the University of California, Santa Cruz.

“We're all headed for an 'ignorance spiral' if we don't stop American standards of persuasion from deteriorating . . . Don't be part of the problem. Read the book.” —Philadelphia Inquirer

“A brilliant tour-de-force . . . about the most pervasive cultural phenomena of our time.” —George Gerbner, Dean Emeritus of the Annenberg School of Communication

“The authors . . . inform, provoke, and occasionally shock the reader about the ways in which our beliefs, preferences, and choices are constantly influenced.” —Mahzarin Banaji, Yale University

“After reading this book, I have begun to doubt that I ever had much control over how I have been influenced by media hype and clever half-truths.” —James Randi, debunker of psychic fraud and author of Flim-Flam and The Mask of Nostradamus

“I could easily list ten reasons why you should read this book, but your boss and colleagues will probably tell you more about it at the office tomorrow--or worse, your competitors will show you next week.” —Peter H. Farquhar, Center for Product Research, Carnegie-Mellon University

“A gold mine of valuable information and insights into the persuasion process.” —Robert B. Cialdini, Arizona State University, and author of Influence