Chanel: A Woman of her Own (Paperback) 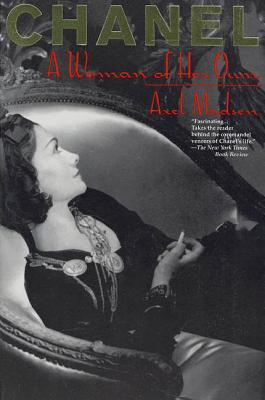 Chanel: A Woman of her Own (Paperback)

Chanel. The name alone evokes fashion and perfume, emancipation and allure. In this revealing, intimate biography, Axel Madsen brings to life Gabrielle "Coco" Chanel, who was born an illegitimate pauper and rose to become the reigning queen of fashion who revolutionized women's styles forever.

Madsen traces Chanel's extrordinary life, from her beginnings as an orphan, to the first small boutique she opened in 1910, using her lover's financial backing, to the founding of the House of Chanel where she altered the look of fashion entirely, inventing sportswear, the "little black dress," costume jewelry, and the perfume that Marilyn Monroe said was all she wore to bed. Although loved by many men, Coco remained wed only to her business, and when she died in 1971, at the age of eighty-eight, she was wealthy, an international celebrity, and utterly alone.

Lavishly illustrated with photographs of Coco Chanel and her celebrated circle of friends and lovers, Chanel: A Woman of Her Own is the story of the magnificent woman whose legend lives on.

Axel Madsen was a biographer and journalist. Born in Denmark and raised in Paris, he first began writing for the Paris edition of The New York Herald Tribune. He moved to Los Angeles in the 1960s, where he wrote biographies of Coco Chanel, Billy Wilder, John Jacob Astor, and Jacques Cousteau among others. He died in 2007.
“Madsen ferrets out the seeming truth of a women appartently as deft at fabricating her life as she was with aneedle and thread.” —Publishers Weekly