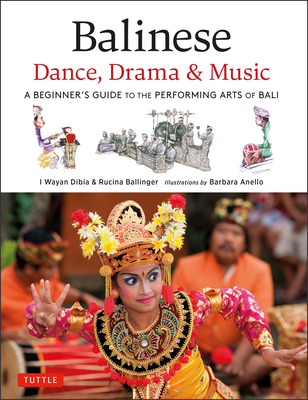 
Coming Soon—Pre-Order Now
Discover the richness and beauty of Bali's many performing art forms. This book is a lavishly illustrated introduction to the most popular forms of traditional performing arts in Bali--among the most intricate and spectacular musical and theatrical performances found anywhere. Ideal reading for visitors to the island, as well as anyone interested in Balinese culture, this book presents the history and form of each performance--with 250 watercolor illustrations and full-color photos to aid in identification. Introductory sections discuss how the performing arts are learned in Bali and the basic religious and cultural tenets expressed through the arts. Subsequent chapters describe each form, including Gamelan Gong Keybar, Gambuh, Legong Keraton, Baris, Wayang Kulit and many more Chapters include:
What is Gamelan?Women in Non-Traditional RolesThe Stories in Balinese TheatreSacred and Ceremonial DancesAnd many more
Expert authors I Wayan Dibya and Rucina Ballinger discuss how the performing arts in Bali are passed from one generation to the next and the traditional values these performances convey, as well as their place within religious celebrations and how and when the performances are staged. In addition to including a bibliography and discography, the book is enhanced with over 200 stunning photographs and specially-commissioned watercolor illustrations from artist Barbara Anello.
I Wayan Dibia is a choreographer, dancer, and musician. He received his PhD from the University of California in 1992 and a professorship in choreography from the College of Indonesian Arts in Denpasar in 1999. Rucina Ballinger is an American educator and lecturer on Balinese culture. A founding member of Gamelan Sekar Jaya, she is an accomplished dancer and performs frequently in Bali and abroad as a dancer and comic. She has lived in Ubud since 1985. Barbara Anello is an American artist, writer, and photographer who divides her time between Manhattan and Bali. She has exhibited her paintings and photographs across the U.S., Europe, and Asia. Her paintings for Balinese Dance, Drama & Music were specially commissioned.