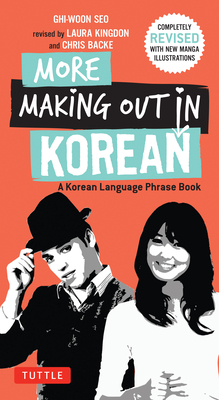 
Not On Our Shelves—Ships in 1-5 Days
More Making Out in Korea is a fun, accessible and thorough Korean phrase book and guide to the Korean language as it's really spoken. Now in its third edition, this is the perfect introduction to Korean as it's really spoken--from everyday interactions to basic questions to the language of love. It includes phrases and tidbits of information on a variety of social situations such as eating out, traveling texting, and much more. More Making Out in Korean features a pronunciation guide and basic grammar, as well as guidelines for the use of polite and informal phrases so you'll never put a foot wrong when:
Each expression in this Korean phrasebook is given in Korean script as well as the Romanized form to enhance your experience of the language (and help you with "written socializing" on computers and gadgets). Full of colorful slang, straight talk and a little cultural savvy on the side, this book has what you need to get started. Pick it up and get ready to converse.
Ghi-woon Seo has taught both English and Korean for many years in a variety of settings. Laura Kingdon is a graduate of Yonsei University's Korean Language Institute, so understands firsthand the complexities of learning Korean grammar. She is fluent in several languages and runs a translation firm. She has designed curricula and taught English as a Second Language to students of all ages, ranging from university students in Kazakhstan to elementary school children in Korea. After years of living in Seoul, she has recently moved to Thailand. Chris Backe blogs about travel and life at Chris in South Korea and Chris in Thailand. He has been published in several Korean magazines including Groove Magazine, 10 Magazine, Busan Haps, The East (based in England), and on visitseoul.net. He has been featured on several UK radio programs or subjects ranging from Korea to current technology. He has authored or contributed to various books on Korean language and culture, including Weird and Wonderful Korea.