Crown & Sceptre: A New History of the British Monarchy, from William the Conqueror to Elizabeth II (Hardcover) 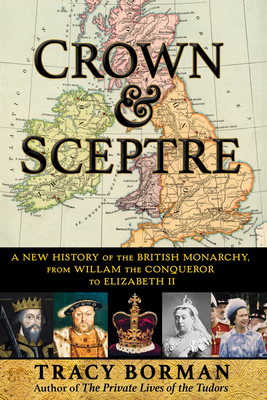 Crown & Sceptre: A New History of the British Monarchy, from William the Conqueror to Elizabeth II (Hardcover)


On Our Shelves Now at:
On the eve of Queen Elizabeth II's historic 70th anniversary on the throne, Tracy Borman's sweeping narrative of the British monarchy illuminates one of history's most iconic and enduring legacies

Since William the Conqueror, duke of Normandy, crossed the English Channel in 1066 to defeat King Harold II and unite England's various kingdoms, forty-one kings and queens have sat on Britain's throne: "shining examples of royal power and majesty alongside a rogue's gallery of weak, lazy, or evil monarchs," as Tracy Borman evocatively describes them in her sparkling chronicle, Crown & Sceptre. Ironically, during very few of these 955 years has the throne's occupant been unambiguously English--the Norman French, the Welsh-born Tudors, the Scottish Stuarts, and the Hanoverians and their German successors to the present day have dominated the throne.

Appealing to the intrinsic fascination with British royalty, Borman lifts the veil to reveal the remarkable characters and personalities who have ruled and, since the Glorious Revolution of 1688, have more ceremonially reigned--a crucial distinction explaining the staying power of the monarchy as the royal family has evolved and adapted to the needs and opinions of its people, avoiding the storms of rebellion that brought many of Europe's royals to an abrupt end. Richard III; Henry VIII; Elizabeth I; George III; Victoria; Elizabeth II: their names evoke eras and dramatic events, forming the sweep of British history that Borman recounts. She is equally attuned to the fabric of monarchy: the impact of royal palaces; the way monarchs have been portrayed in art, on coins, in the media; the ceremony and pageantry surrounding the crown.

In 2024, Elizabeth II would eclipse France's Louis XIV as the longest reigning monarch in history. Crown & Sceptre is a fitting tribute to her remarkable longevity and that of the magnificent institution she represents.

Tracy Borman is England's joint Chief Curator of Historic Royal Palaces and Chief Executive of the Heritage Education Trust. She is the author of many highly acclaimed books, including Henry VIII and the Men Who Made Him; The Private Lives of the Tudors: Uncovering the Secrets of Britain's Greatest Dynasty; Thomas Cromwell: The Untold Story of Henry VIII's Most Faithful Servant; Queen of the Conqueror: The Life of Matilda, Wife of William I; Elizabeth's Women: Friends, Rivals, and Foes Who Shaped the Virgin Queen; Witches: A Tale of Sorcery, Scandal and Seduction; as well as the trilogy of novels The King's Witch, The Devil's Slave, and The Fallen Angel. Borman is also a regular broadcaster and accomplished public speaker.