Information Wars: How We Lost the Global Battle Against Disinformation and What We Can Do about It (Hardcover) 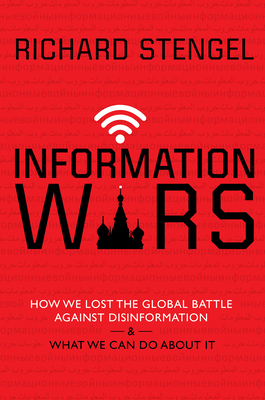 Information Wars: How We Lost the Global Battle Against Disinformation and What We Can Do about It (Hardcover)

Disinformation is as old as humanity. When Satan told Eve nothing would happen if she bit the apple, that was disinformation. But the rise of social media has made disinformation even more pervasive and pernicious in our current era. In a disturbing turn of events, governments are increasingly using disinformation to create their own false narratives, and democracies are proving not to be very good at fighting it.

During the final three years of the Obama administration, Richard Stengel, the former editor of Time and an Under Secretary of State, was on the front lines of this new global information war. At the time, he was the single person in government tasked with unpacking, disproving, and combating both ISIS's messaging and Russian disinformation. Then, in 2016, as the presidential election unfolded, Stengel watched as Donald Trump used disinformation himself, weaponizing the grievances of Americans who felt left out by modernism. In fact, Stengel quickly came to see how all three players had used the same playbook: ISIS sought to make Islam great again; Putin tried to make Russia great again; and we all know about Trump.

In a narrative that is by turns dramatic and eye-opening, Information Wars walks readers through of this often frustrating battle. Stengel moves through Russia and Ukraine, Saudi Arabia and Iraq, and introduces characters from Putin to Hillary Clinton, John Kerry and Mohamed bin Salman to show how disinformation is impacting our global society. He illustrates how ISIS terrorized the world using social media, and how the Russians launched a tsunami of disinformation around the annexation of Crimea - a scheme that became the model for their interference with the 2016 presidential election. An urgent book for our times, Information Wars stresses that we must find a way to combat this ever growing threat to democracy.

Richard Stengel was the Under Secretary of State for Public Diplomacy and Public Affairs from 2013-2016. Before working at the State Department, he was the Editor of TIME for seven years, from 2006-2013. From 1992 to 1994, he collaborated with Nelson Mandela on the South African leader's autobiography Long Walk to Freedom. Stengel later wrote Mandela's Way, a New York Times best-seller, on his experience working with Mandela. He is the author of several other books, including January Sun, a book about life in a small South African town as well as You're Too Kind: A Brief History of Flattery. He is an NBC/MSNBC analyst and lives in New York