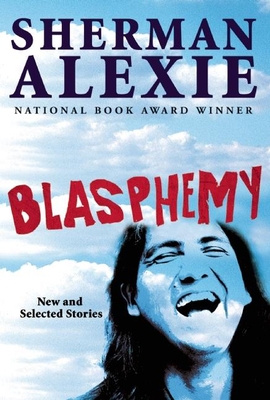 
Backordered
Sherman Alexie's stature as a writer of stories, poems, and novels has soared over the course of his twenty-book, twenty-year career. His wide-ranging, acclaimed stories from the last two decades, from The Lone Ranger and Tonto Fistfight in Heaven to his most recent PEN/Faulkner award-winning War Dances, have established him as a star in modern literature. A bold and irreverent observer of life among Native Americans in the Pacific Northwest, the daring, versatile, funny, and outrageous Alexie showcases all his talents in his newest collection, Blasphemy, where he unites fifteen beloved classics with fifteen new stories in one sweeping anthology for devoted fans and first-time readers. Included here are some of his most esteemed tales, including "What You Pawn I Will Redeem, "This is What it Means to Say Phoenix, Arizona," "The Toughest Indian in the World," and "War Dances." Alexie's new stories are fresh and quintessential--about donkey basketball leagues, lethal wind turbines, the reservation, marriage, and all species of contemporary American warriors. An indispensable collection of new and classic stories, Blasphemy reminds us, on every thrilling page, why Sherman Alexie is one of our greatest contemporary writers and a true master of the short story.

Alexie is a poet, novelist, and screenwriter. He has won the Pen/Faulkner Award, Stranger Genius Award in Literature, Boston Globe-Horn Book Award for Excellence in Children's Literature, and the Malamud Award. Alexie lives in Seattle.

"Over the years, Alexie has carved out a space in American literature as the great, tragicomic bard of the modern Native American experience. The stories in Blasphemy offer ample proof why. . . . Told in [Alexie's] irreverent, unforgettable voice . . . You'll feel you've been transported inside the soul of a deeply wounded people. But they are a people too comfortable in their brown skins to allow those wounds to break them. . . . With irony and sardonic wit, the Native men and women in Alexie's imagination find a way forward, and they endure. . . . [A] great triumph."Los Angeles Times

"Alexie once again reasserts himself as one the most compelling contemporary practitioners of the short story. In Blasphemy, the author demonstrates his talent on nearly every page. These are deceptively simple, swift-moving stories awash with characters in the thrall of various sins and existential quandaries. Alexie deftly administers near equal doses of pathos and humor, providing such smooth entertainment that some readers may glide over his empathetic treatment of such themes as racism, identity, family, loyalty, and ceremony. . . . Will appeal to fans of Junot Diaz, George Saunders, and readers new to Alexie will find this enriching collection to be the perfect introduction to a formidable literary voice. . . . [Alexie] illuminates the lives of his characters in unique, surprising and, ultimately, hopeful ways."Boston Globe

"The truths [Alexie] mines are so insightful that even the most ardent critic must pause and consider his words. The depth of Alexie's stories is complemented by the self-awareness and unapologetic humor that suffuse almost every page. Again, Alexie draws out laughter, even as a reader struggles to understand the overwhelming sadness these tales can evoke. . . . The strength of Alexie's work is his unrepentant exploration of what it means to be 'other.' . . . Blasphemy is blasphemous only in disrespecting the boundaries that many would place on those who mine otherness."Washington Independent Review of Books

"[Alexie] has been celebrated for his acerbic, funny, politically charged stories. . . . Tenderness along with passiongovernable or otherwiseare elements as pervasive in his impressive body of work as his subversive humor, his grief and outrage over the exploitation and neglect of indigenous populations in the United States. . . . If literary fiction in its purest form is meant to be an accurate reflection of human experience and its inevitable ambiguities, Alexie skillfully offers us this in Blasphemy. . . . What Alexie makes poignantly clear in the stories he has written in his long and robust career is that we cannot choose whom we fall in love with, nor can we choose who, fundamentally, we are."San Francisco Chronicle

"[Blasphemy] haunts the reader with men whose choices lead to misfortune. One can also expect the humor and small redemptions that are present in Alexie's best work."Time Out New York (5 stars)

"Sweet, salty, and full of heart . . . In his stories [Alexie's] stories are wide open to love and death, fathers and sons, grief and loss, and the multiple dilemmas of marriage and race and waking up pathetically human. His stories speed along, most first-person narration, in a voice so captivating you don't want him (or her) to stop."Star-Tribune (Minneapolis)

"Shot through with emotional strain . . . A powerful thwap against mainstream knowledge of American Indians . . . Each story is a page-turner . . . a series of literary sprints, each one quickening your heart rate and leaving you pausing to catch your breath before you're on to the next."Huffington Post

"The supreme irony of all identity writing . . . is that the literary trick does not click unless everyone is in on it. . . . Sherman Alexie, with his shamanistic convicts, drunken fathers, homeless heroes, and gay boxers, understands this imp or inclusion to an almost supernatural fault. . . . Alexie's voice, for so long the go-to growl of the contemporary American Indian experience, seems to have gotten braver with age. . . . Alexie's authority here is an inclusive comic sorrow that befits the entire world."Dallas News

"A beautiful anthology . . . Each character is distinctly memorable. . . . [Alexie] leads his readers through a minefield or grave situations while turning back to wink and crack jokes along the way."Brooklyn Rail

"Blasphemy succeeds in placing new stories within the solid foundation of what are now Alexie classics. The result is a thoughtfully arranged overview of Alexie's most important themes and some of his most loved characters, complemented by dynamic new work."Pittsburgh Post-Gazette

"A masterful gift . . . It takes a special talent to tackle despair and isolation while maintaining an overarching optimism. . . . Alexie writes concisely and simply, which makes following the author's whimsy a breezy joy and constant surprise. The stories teeter between serious, philosophical musings and bitter sarcasm, which together give the stories a unique rhythm. . . . Blasphemy acts as Alexie's definitive statement about common human experiences."Daily Nebraskan

"Brilliant . . . A fearless two-decade examination of Sherman Alexie's Native America, and also a testament to his mastery of the short-story form."The Toronto Star

"A poet and fiction writer for adults of all ages, National Book Award winner Alexie is a virtuoso of the short story. His first two blazing collections, The Lone Ranger and Tonto Fistfight in Heaven and The Toughest Indian in the World, established him as an essential American voice. Now, many books later, best-selling Alexie has created a substantial, big-hearted, and potent collection that combines an equal number of new and selected stories to profound effect. In these comfort-zone-destroying tales, including the masterpiece, 'War Dances,' his characters grapple with racism, damaging stereotypes, poverty, alcoholism, diabetes, and the tragic loss of languages and customs. Questions of authenticity and identity abound. . . . Alexie writes with arresting perception in praise of marriage, in mockery of hypocrisy, and with concern for endangered truths and imperiled nature. He is mischievously and mordantly funny, scathingly forthright, deeply and universally compassionate, and wholly magnetizing. This is a must-have collection."Booklist (starred review)

"[A] sterling collection of short stories by Alexie, a master of the form. . . . . The newer pieces are full of surprises. . . . . These pieces show Alexie at his best: as an interpreter and observer, always funny if sometimes angry, and someone, as a cop says of one of his characters, who doesn’t 'fit the profile of the neighborhood.'"Kirkus Reviews (starred review)

"Alexie hammers away at ever-simmering issues, like racism, addiction, and infidelity, using a no-holds-barred approach and seamlessly shattering the boundary between character and reader. But while these glimpses into a harried and conflicted humanity prod our consciousness, there’s plenty of bawdiness and Alexie’s signature wicked humor throughout to balance out the weight."Publishers Weekly (starred review)

"Like the best storytellers, Alexie can toss off heartbreakingly expressive and profound sentiments with a humor and nonchalance that cleverly conceal their gravity. It's these deceptively poignant moments that drive Alexie's work and provide an earthly backdrop to the cosmic swap meets of our souls. . . . [He] translates the beauty of his forbears' straightforward philosophy into a jarring and transcendent literary experience. . . . Told with his hallmark wit and candor [Blasphemy] captures the splendors of [Alexie's] considerable talent."Portland Monthly

"Highlights Alexie's unique ability to create deeply moving and thought-provoking stories that can make you laugh out loud and simultaneously break your heart . . . Alexie's stories do not shy away from depicting the poverty, addiction, and violence that affects many Native American communities, but he explores these darker aspects of life with biting humor and a lot of compassion, letting the joy shine through as well. . . . Explores the universal themes of relationships and identity along with the thornier issues of American life, like race and class, with remarkable heart and humor."Kasia Hopkins, The News-Gazette (Illinois)