Remembering Stalin's Victims: Popular Memory and the End of the USSR (Hardcover) 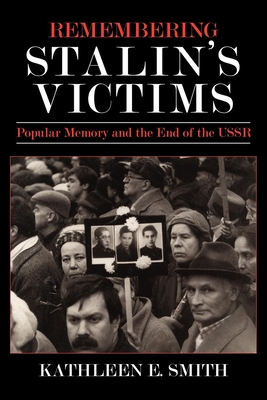 Remembering Stalin's Victims: Popular Memory and the End of the USSR (Hardcover)

In Remembering Stalin's Victims, Kathleen E. Smith examines how government reformers' repudiation of Stalin's repressions both in the 1950s and in the 1980s created new political crises. Drawing on interviews, she tells the stories of citizens and officials in conflict over the past. She also addresses the underlying question of how societies emerging from rep1;essive regimes reconcile themselves to their memories. Soviet leaders twice attempted to liberalize communist rule and both times their initiatives hinged on criticism of Stalin. During the years of the Khrushchev "thaw" and again during Gorbachev's glasnost, anti-Stalinism proved a unique catalyst for democratic mobilization. Under Gorbachev, dissatisfaction with half truths about past atrocities united citizens from all walks of life in the Memorial Society, an independent mass movement that eventually challenged the very notion of reform communism. Smith investigates why citizens risked confrontation with the Communist Party in order to promote recognition of the victims of Stalinism and recompense for their survivors. Efforts to acknowledge the bitter legacy of totalitarian rule, while originally supporting a stable statesociety reform coalition, ultimately provoked "radical" demands for openness about the past, official accountability, and institutional guarantees of human rights, Smith explains. The battle over the Soviet past, she suggests, not only illuminates the dynamic between elite and mass political actors during liberalization, but also reveals the scars that totalitarian rule has left on Russian society and the long-term obstacles to reform it has created.