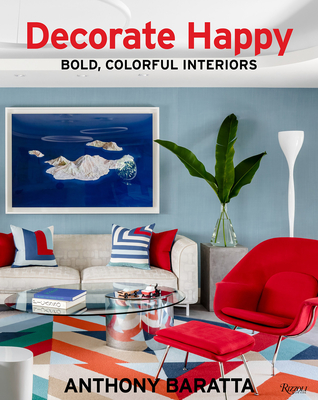 
On Our Shelves Now at:
The first solo book by celebrated interior designer Anthony Baratta, Decorate Happy showcases Baratta's preppy-chic style in a pattern-filled guide to decorating with verve and style.

Anthony Baratta's rooms are happy. Whether they are found in the country or the city, these maximalist rooms are designed to make you smile. In his first solo book, Anthony Baratta, whose work has graced more than fifty magazine covers and been celebrated in the Cooper-Hewitt, shares twelve of his most recent houses, all in their own way perfect examples of his classic high-color, high-pattern all-American style. Some nod to the historical importance of centuries past, like an eighteenth-century house in Colonial Williamsburg; some are nautical chic. Some are glorious pop art, with mod rooms and bright primary colors, while others are chicly rustic. Although all the houses are unique, their rooms share one consistent underpinning: joy.

Colorful, pattern-filled, life-affirming--these are rooms where life is meant to be lived to the fullest.
Anthony Baratta, the king of East Coast chic, is one of the most celebrated and respected interior designers of the day with a global following of loyal fans. Formerly half of the iconic design dream team Diamond Baratta, Baratta has been named one of Traditional Home's 20 Design Icons, honored by the Cooper-Hewitt, awarded Benjamin Moore's coveted Hue Award for lifetime achievement in design, and named the inaugural designer in residence in Colonial Williamsburg. The author of two previous books, All-American: The Exuberant Style of William Diamond and Anthony Baratta and Diamond Baratta Design, Baratta opened his own firm in 2016.