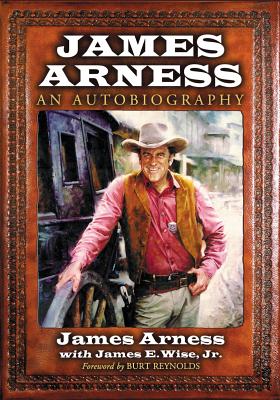 
Not On Our Shelves—Ships in 1-5 Days
James Arness gives the full story on his early years, his family, his military career and his film work in Hollywood, including appearances in the cult-favorite science fiction movies Them and The Thing. He had a very long run on television's Gunsmoke and a role in the miniseries How The West Was Won. His post-theatrical period is also covered. This is a republication in paperback of the 2001 edition--the long anticipated account of one of the icons of 20th-century television. He offers many anecdotes of interacting with the Gunsmoke family, such as Miss Kitty, Doc and Festus. His own work as a producer is covered. Throughout are previously unpublished photographs from the author's collection. Appendices include comments by show biz colleagues and Gunsmoke alumni, and a sampling of letters received from his fans. Actor and fellow Gunsmoke performer Burt Reynolds has written a foreword to the book.
The late James Arness lived in suburban Los Angeles with his wife Janet, where they were involved in various charity projects. The late James E. Wise, Jr., a retired Navy captain in Alexandria, Virginia (d. 2013), wrote many books on history and the performing arts. He served as an intelligence officer aboard USS America during the 1967 Six Day War in the eastern Mediterranean and later in the Gulf of Tonkin during the Vietnam War.