Lou Von Salome: A Biography of the Woman Who Inspired Freud, Nietzsche and Rilke (Paperback) 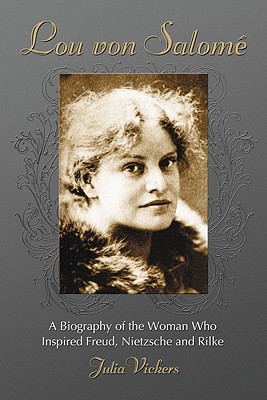 Lou Von Salome: A Biography of the Woman Who Inspired Freud, Nietzsche and Rilke (Paperback)

The daughter of an illustrious Russian general, Lou von Salome left her home in the heart of Tsarist Russia to conquer intellectual Europe at the tender age of 18. Eventually settling in Germany, she became a best-selling novelist, a groundbreaking essayist, and a well-known literary critic. In addition to all this, Salome was a real-life muse for some of the most brilliant men of her time. This biography tells the story of Salome's entire life and career, focusing on her young adulthood; celibate marriage with linguistics scholar Carl Friedrich Andreas; rumored affairs with Friedrich Nietzsche, Rainier Maria Rilke, and several other authors and poets; and her relationship with Sigmund Freud, which was marked most notably by their contrasting views of psychoanalysis.

Writer, producer, editor and researcher Julia Vickers works for the PBS program, Religion and Ethics. She lives in Germantown, Maryland.