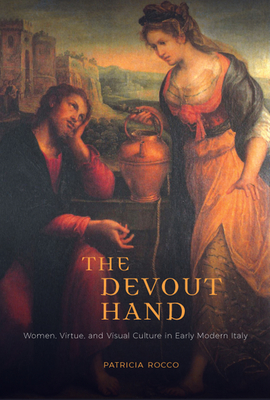 
Special Order—Subject to Availability
After the Counter-Reformation, the Papal State of Bologna became a hub for the flourishing of female artistic talent. The eighteenth-century biographer Luigi Crespi recorded over twenty-eight women artists working in the city, although many of these, until recently, were ignored by modern art criticism, despite the fame they attained during their lifetimes. What were the factors that contributed to Bologna’s unique confluence of women with art, science, and religion? The Devout Hand explores the work of two generations of Italian women artists in Bologna, from Lavinia Fontana (1552–1614), whose career emerged during the aftermath of the Counter Reformation, to her brilliant successor, Elisabetta Sirani (1638–1665), who organized the first school for women artists. Patricia Rocco further sheds light on Sirani’s students and colleagues, including the little-known engraver Veronica Fontana and the innovative but understudied etcher Giuseppe Maria Mitelli. Combining analysis of iconography, patronage, gender, and reception studies, Rocco integrates painting, popular prints, book illustration, and embroidery to open a wider lens onto the relationship between women, virtue, and the visual arts during a period of religious crisis and reform. A reminder of the lasting power of images, The Devout Hand highlights women’s active role in sixteenth- and seventeenth-century Christian reform and artistic production.
Patricia Rocco is adjunct professor of art history at Hunter College of the City University of New York and Manhattan School of Music.
"This compelling study constitutes an innovative, broad-ranging resource for understanding the role of women artists in Bologna after the Counter-Reformation." Early Modern Women: An Interdisciplinary Journal

"Proposing convincing interpretations of the flowering and meaning of their work, The Devout Hand is an original study of the phenomenon of women artists as a whole." Gabriella Zarri, University of Florence

"Original, well-considered, and effectively presented, Rocco’s study refocuses attention on and re-evaluates genres, artistic practices, and media that have been relegated to the margins of art history discourse." Adelina Modesti, La Trobe University