Lord Mansfield: Justice in the Age of Reason (Hardcover) 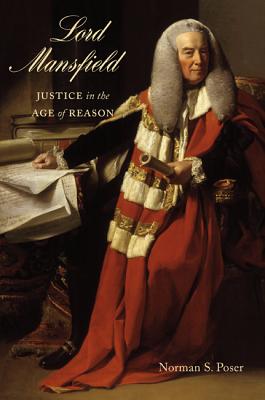 Lord Mansfield: Justice in the Age of Reason (Hardcover)


Special Order—Subject to Availability
In the first modern biography of Lord Mansfield (1705-1793), Norman Poser details the turbulent political life of eighteenth-century Britain's most powerful judge, serving as chief justice for an unprecedented thirty-two years. His legal decisions launched England on the path to abolishing slavery and the slave trade, modernized commercial law in ways that helped establish Britain as the world's leading industrial and trading nation, and his vigorous opposition to the American colonists stoked Revolutionary fires. Although his father and brother were Jacobite rebels loyal to the deposed King James II, Mansfield was able to rise through English society to become a member of its ruling aristocracy and a confidential advisor to two kings. Poser sets Mansfield's rulings in historical context while delving into Mansfield's circle, which included poets (Alexander Pope described him as "his country's pride"), artists, actors, clergymen, noblemen and women, and politicians. Still celebrated for his application of common sense and moral values to the formal and complicated English common law system, Mansfield brought a practical and humanistic approach to the law. His decisions continue to influence the legal systems of Canada, Britain, and the United States to an extent unmatched by any judge of the past. An illuminating account of one of the greatest legal minds, Lord Mansfield presents a vibrant look at Britain's Age of Reason through one of its central figures.
Norman S. Poser is professor emeritus at Brooklyn Law School.
“[Mansfield’s] rulings from the bench shaped British and American law for generations….In the story of his subject’s rise from courtroom lawyer to royal adviser, Poser offers a close-up look at English politics of the period, and the details of Mansfield’s personal life illuminate the standards of upper-class English society at the time.” Library Journal

“With meticulous research in sources including the Mansfield archives in Scotland, Poser has produced a brilliantly readable history. Essential.” CHOICE

"A remarkable portrait of both a man and a legal age. I enjoyed the book tremendously, learned so much, and am deeply grateful. A master work." Kent Syverud, Ethan A. H. Shepley Distinguished University Professor, Washington University School of Law

“In this thorough but highly readable biography, Norman Poser, professor emeritus at Brooklyn Law School, tackles both the life and legacy of this eighteenth century giant.”—The Gazette (Weekly Journal of the Law Society)

"[Mansfield’s] rulings from the bench shaped British and American law for generations … In the story of his subject’s rise from courtroom lawyer to royal adviser, Poser offers a close-up look at English politics of the period, and the details of Mansfield