Dispatches from the Front: The Life of Matthew Halton, Canada's Voice at War (Paperback) 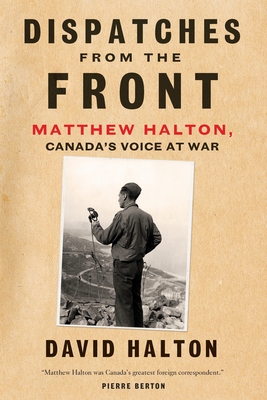 Dispatches from the Front: The Life of Matthew Halton, Canada's Voice at War (Paperback)


Special Order—Subject to Availability
The first major biography of an iconic war correspondent sheds light on the personal life and fascinating career of a remarkable Canadian figure--and it's now available in paperback.

"This is Matthew Halton of the CBC."
So began Matthew Halton's war broadcasts. Originally a reporter for the Toronto Star, Matt Halton, as Senior War Correspondent for the CBC during the Second World War, reported from the front lines in Italy and Northwest Europe, and became "the voice of Canada at war." His reports were at times tender and sad and other times shocking and explosive. Covering the flashpoints of his generation--from the war trenches to the coronation of the Queen--Halton filed a series of reports warning that the Third Reich was "becoming a vast laboratory and breeding ground for war." For a decade he chronicled Europe's drift to disaster, covering the breakdown of the League of Nations, the Spanish Civil War, and the Nazi takeover of Austria and Czechoslovakia. Along the way he interviewed Franklin Delano Roosevelt, Herman Goering, Neville Chamberlain, Charles de Gaulle, Mahatma Gandhi, and dozens of others who shaped the history of the last century.
Drawing on extensive interviews and archival research, this definitive biography, written by Matthew's son, acclaimed former CBC correspondent David Halton, is a fascinating look at the career of one of the most accomplished journalists Canada has ever known.

DAVID HALTON, formerly the CBC News's Senior Correspondent in Washington D.C., is one of Canada's most acclaimed journalists. Throughout his career, he was The National's Paris-based correspondent, reporting on the de Gaulle government, Israel's Six Day War, and a coup in Greece. He was the CBC's Moscow correspondent between 1967 and 1968 and later covered events in the Middle East and the war in Vietnam. In addition, he was the chief political correspondent in Ottawa from 1978 to 1991. In 2005, Halton was presented with one of the most prized Gemini awards, the Gordon Sinclair Award for Broadcast Journalism.

"In this biographical book by his son David, himself a distinguished broadcaster, the elder Halton became the hypnotic voice of the Second World War that Canadians relied on to tell them what and how their fighting men were doing in combat overseas." Winnipeg Free Press

"A book-length treatment of Halton was long overdue. Luckily for readers, David Halton has lived up to his father's exacting standards." Toronto Star

“This is a clear-eyed, well-written and important book about a great journalist.” Ottawa Citizen

“Dispatches from the Front is a well-wrought tribute to a man and a craft, the best account ever written of a Canadian reporter’s life and work.” Literary Review of Canada

“An extraordinary book that compellingly limns Matt’s extravagant, adventurous, achievement-filled, and far-from-perfect life. While doing so, David [Halton] also creates a vivid portrait of one of the most dramatic periods of the last century—the run-up to the Second World War and the conflict itself.” Anthony Wilson-Smith, Policy Magazine

“David Halton’s biography of his father Matthew Halton is a fascinating tale of an international journalist who had humble roots in Pincher Creek.” Pincher Creek Echo

“[Halton’s] book is well-researched, comprehensive and highly readable. It is a fascinating look at his father’s life, warts and all.” Victoria Times Colonist

“This is much more than one man’s memoir of his father. It is a tribute to one of Canada’s national treasures.” Morley Safer, CBS 60 Minutes

"Like an iron filing to a magnet Matthew Halton was inexorably drawn to WW2's front lines – from North Africa to Berlin. Acknowledged as one of the very best correspondents covering the war his exploits at the fronts and his spirited carousing between battles has been painstakingly researched and colourfully recorded by his son David. As a result, viewing the war as seen by someone who described it as it was happening all around him makes for an extraordinary read." Maj.-Gen. (Rtd.) Lewis Mackenzie, former UN peacekeeping commander

“This is an ode to bravery and to journalism. Every Canadian should know Matthew Halton’s story.” Wendy Mesley, CBC reporter/anchor

“At last a first class biography of Matthew Halton, the greatest Canadian foreign and war correspondent. Well-researched and well-written, this study by his son is frank and fair, and the book tells us much about Canadian journalism and broadcasting in the golden age.” J.L. Granatstein, author of The Oxford Companion to Canadian Military History