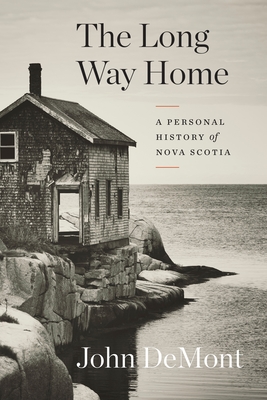 
Special Order—Subject to Availability
The province's premier journalist tells the story he was born to write.

No journalist has travelled the back roads, hidden vales and fog-soaked coves of Nova Scotia as widely as John DeMont. No writer has spent as much time considering its peculiar warp and weft of humanity, geography and history.
The Long Way Home is the summation of DeMont's years of travel, research and thought. It tells the story of what is, from the European view of things, the oldest part of Canada. Before Confederation it was also the richest, but now Nova Scotia is among the poorest. Its defining myths and stories are mostly about loss and sheer determination.
Equal parts narrative, memoir and meditation, The Long Way Home chronicles with enthralling clarity a complex and multi-dimensional story: the overwhelming of the first peoples and the arrival of a mélange of pioneers who carved out pockets of the wilderness; the random acts and unexplained mysteries; the shameful achievements and noble failures; the rapture and misery; the twists of destiny and the cold-heartedness of fate.
This is the biography of a place that has been hardened by history. A place full of reminders of how great a province it has been and how great—with the right circumstances and a little luck—it could be again.
JOHN DEMONT is a senior writer and columnist for The Chronicle Herald and Herald Magazine. He is an award-winning journalist and author with more than 25 years of experience. A former national correspondent for Maclean's magazine, his books include Citizens Irving, The Last Best Place, Coal Black Heart, and, most recently, A Good Day's Work.
Advance Praise for The Long Way Home:

“DeMont drifts with ease between the present and the past, evoking with great feeling those who walked and breathed and cultivated this land before us. I wish all history books were so beautifully written.” —Donna Morrissey, author of The Fortunate Brother

“The Long Way Home is history from the heart written with a journalist's instinctive understanding of the instructive power in dramatic detail and human foible, places where historians all too often fear to tread.” —Linden MacIntyre, author of The Only Café

“This is a voyage for the ages—a tender peregrination through memory and the province that is Canada’s old soul, rendered vivid and exceptionally moving by the author’s singular knowledge and love of place.” —Noah Richer, author of The Candidate

“John DeMont knows this very well: Nova Scotians have always taken our history personally. Our identities both as a province and the separate cultures under its umbrella are defined by recognizing and protecting it.  We look to our history and we know who we are, we hold it to our hearts as we walk forward.  Demont has walked the width and length of Nova Scotia for decades encountering this history, sometimes even in person as it happened.  You get the sense that he has gathered the province in his arms.  He is captured by personalities, of those who leap naturally from the pages of the history books, but also those modern stewards, the local that someone points him towards for a story, the living encounters that left an impression.  It is the Nova Scotia we live and love, the hard-won and heartbreak both, a personal history, as is only fit from someone who met it face to face so often.” —Kate Beaton, author of Hark! A Vagrant and Step Aside, Pops

“John DeMont has done wandering Nova Scotians a great service.  In this wonderfully and carefully written book he has captured much of what we all miss when we're away, and what keeps us coming home.” —Gerald Butts, Principal Secretary, the Prime Minister of Canada