The Woman Who Fell from the Sky: An American Woman's Adventures in the Oldest City on Earth (Paperback) 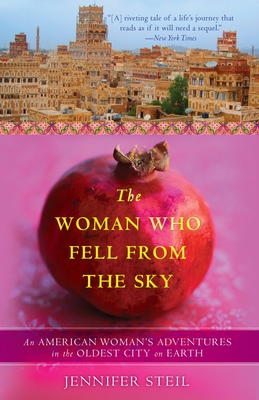 The Woman Who Fell from the Sky: An American Woman's Adventures in the Oldest City on Earth (Paperback)


Not On Our Shelves—Ships in 1-5 Days
"I had no idea how to find my way around this medieval city. It was getting dark. I was tired. I didn’t speak Arabic. I was a little frightened. But hadn’t I battled scorpions in the wilds of Costa Rica and prevailed? Hadn’t I survived fainting in a San José brothel?  Hadn’t I once arrived in Ireland with only $10 in my pocket and made it last two weeks? Surely I could handle a walk through an unfamiliar town. So I took a breath, tightened the black scarf around my hair, and headed out to take my first solitary steps through Sana’a."—from The Woman Who Fell From The Sky

In a world fraught with suspicion between the Middle East and the West, it's hard to believe that one of the most influential newspapers in Yemen—the desperately poor, ancestral homeland of Osama bin Laden, which has made has made international headlines for being a terrorist breeding ground—would be handed over to an agnostic, Campari-drinking, single woman from Manhattan who had never set foot in the Middle East. Yet this is exactly what happened to journalist, Jennifer Steil.

Restless in her career and her life, Jennifer, a gregarious, liberal New Yorker, initially accepts a short-term opportunity in 2006 to teach a journalism class to the staff of The Yemen Observer in Sana'a, the beautiful, ancient, and very conservative capital of Yemen. Seduced by the eager reporters and the challenging prospect of teaching a free speech model of journalism there, she extends her stay to a year as the paper's editor-in-chief. But she is quickly confronted with the realities of Yemen—and their surprising advantages. In teaching the basics of fair and balanced journalism to a staff that included plagiarists and polemicists, she falls in love with her career again. In confronting the blatant mistreatment and strict governance of women by their male counterparts, she learns to appreciate the strength of Arab women in the workplace. And in forging surprisingly deep friendships with women and men whose traditions and beliefs are in total opposition to her own, she learns a cultural appreciation she never could have predicted.  What’s more, she just so happens to meet the love of her life.

With exuberance and bravery, The Woman Who Fell from the Sky offers a rare, intimate, and often surprising look at the role of the media in Muslim culture and a fascinating cultural tour of Yemen, one of the most enigmatic countries in the world.
Before moving to Yemen in 2006, Jennifer Steil was a senior editor at The Week, which she helped to launch in 2001. Her work has appeared in Time, Life, and Good Housekeeping. She lives in Sana'a, Yemen, with her fiancé, Tim Torlot, the British Ambassador to Yemen and their daughter Theadora Celeste.
"From the first page of The Woman Who Fell From the Sky, Jennifer Steil comes across as a person blessed with sensibility and sensitivity in equal measure. She is the kind of woman who's not fearful of culture shock, danger, or the trials and tribulations of life in what is the Arab World's rawest land. Her writing is an absolute delight -- no nonsense, clear, funny, and sometimes alarming, as she threads her way through the ins and outs of Yemeni life. Steil has achieved far more than a simple description of a stint working at a newspaper in Sana'a. Rather, her book shines a vibrant light on the region, showing it how it is, with astonishing clarity from the inside out."
--Tahir Shah, author of The Caliph's House and In Arabian Nights

"Steil puts humanity and color into her description of a country most Americans know only as a desert haven for terrorists. Her affection for Yemen and its people will make readers want to see it for themselves. A lovely book that offers a large measure of cultural understanding in a region that is too easily misunderstood and caricatured."
--Nina Burleigh, author of Unholy Business

"The Woman Who Fell From the Sky is that rare animal: a memoir which reads like a novel. From the exquisite detail to the passionate, poignant, and often hilarious story of one powerful woman immersed in centuries of patriarchal tradition, Steil takes us on a journey that left me exhausted and exhilarated. Hugely entertaining and vitally important to our times, the book tucks us under a veil and allows us a unique glimpse into a culture as old as Noah. Not only did I remember what it feels and smells like to live imbedded in the Arab world, I also relearned my craft of journalism along with Steil's students in her dusty classroom halfway around the world. Veils and hats off to this winner!"
--Jennifer Jordan, author of Savage Summit: The Life and Death of the First Five Women of K2

"With intelligence, humor, and courage, Jennifer Steil's book helps us see beyond stereotypes of male and female, East and West, conservative and liberal to appreciate the beauty and wonder of deeply rooted cultures--and the authentic relationships that can transcend them all."
--Susan Piver, author of How Not to Be Afraid of Your Own Life and The Wisdom of a Broken Heart

"Jennifer Steil's voice recalls that of Isak Dinesen and Freya Stark: generous and observant, unabashed in her love for her home in exile, yet unafraid to speak her mind about injustice, and everything laced with wit and rich detail. This is an important book about a corner of the world we cannot afford to misunderstand, and Jennifer Steil is the perfect person to guide us."
--Tom Zoellner, author of The Heartless Stone and Uranium