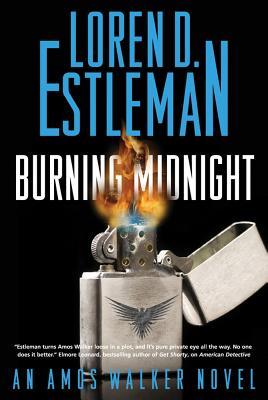 This is book number 22 in the Amos Walker Novels series.

Amos Walker knows Detroit, from the highest to the lowest, and that includes the gangs of Mexicantown. When a friend asks Walker to get his son's brother-in-law out of one of two feuding gangs, Walker gets in trouble fast. First, dead bodies start to pile up; then come suspicious fires and the bottle bombs. Walker is caught in the middle of a gang war.

Whether or not a middle-aged gringo like him can cool things off between the Maldados and the Zapatistas, he's got to try; he did promise his friend. Once he gets involved, he realizes there's something else going on; the specter of an international conspiracy threatens to make this local trouble blow sky-high. And if he ends up dead or in jail for murders he didn't commit, he might have to put that promise on hold. It's tough being Amos Walker.

Loren D. Estleman is the author of more than eighty novels, including the Amos Walker, Page Murdock, and Peter Macklin series. The winner of four Shamus Awards, five Spur Awards, and three Western Heritage Awards, he lives in Central Michigan with his wife, author Deborah Morgan.

“Shamus Award–winner Estleman demonstrates that the art of inserting a Philip Marlowe–esque hero into modern times is alive and well in his twenty-first novel featuring Detroit PI Amos Walker…. Estleman presents a powerful view of the battered inner city. Three decades on, Estleman and Walker show no signs of slowing down.” —Publishers Weekly, Starred Review on Infernal Angels

“Estleman has piled up enough literary awards to add a wing to his home. Read this classic yet modern example of the hard-boiled detective novel and you'll begin to understand why.” —Booklist on Infernal Angels

“Estleman's latest intricate and wholly enjoyable yarn is peppered with mob lore, Detroit history, and the ever-present one-liners. It's sure to please fans of urban mysteries as well as classic detective genre devotees. Strongly recommended.” —Library Journal on The Left-Handed Dollar

“Amos Walker, the throwback private eye who operates out of Detroit in Loren D. Estleman's hard-boiled mysteries, is a lot like the old Cutlass he drives. The guy may look beat up, but under the hood he's a clean machine.” —The New York Times Book Review on The Left-Handed Dollar