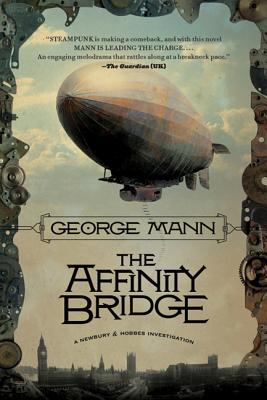 This is book number 1 in the Newbury & Hobbes series.

Get ready to follow dazzling young writer George Mann to a London unlike any you've ever seen and into an adventure you will never forget, in The Affinity Bridge.

Welcome to the bizarre and dangerous world of Victorian London, a city teetering on the edge of revolution. Its people are ushering in a new era of technology, dazzled each day by unfamiliar inventions. Airships soar in the skies over the city, while ground trains rumble through the streets and clockwork automatons are programmed to carry out menial tasks in the offices of lawyers, policemen, and journalists.

But beneath this shiny veneer of progress lurks a sinister side.

Queen Victoria is kept alive by a primitive life-support system, while her agents, Sir Maurice Newbury and his delectable assistant Miss Veronica Hobbes, do battle with enemies of the crown, physical and supernatural. This time Newbury and Hobbes are called to investigate the wreckage of a crashed airship and its missing automaton pilot, while attempting to solve a string of strangulations attributed to a mysterious glowing policeman, and dealing with a zombie plague that is ravaging the slums of the capital.

GEORGE MANN is the author of the Newbury & Hobbes Investigations, beginning with The Affinity Bridge, and other works of fiction including Ghosts of Manhattan and official Doctor Who tie-in material. He edited the Solaris Book of New Science Fiction anthology series and The Mammoth Encyclopedia of Science Fiction.

“Steampunk is making a comeback, and with this novel Mann is leading the charge….An engaging melodrama that rattles along at a breakneck pace.” —The Guardian

“Mann is at the forefront of the new generation of UK movers and shakers.Tremendous fun. Mann writes great chase scenes! [The Affinity Bridge] marks George Mann as a writer of enormous promise.” —SFRevu