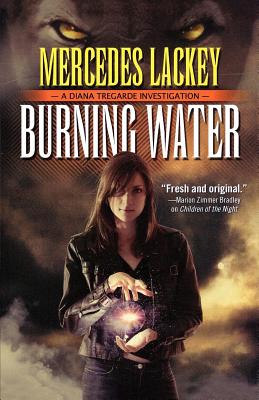 This is book number 1 in the Diana Tregarde Investigation series.

In Mercedes Lackey's Burning Water, a sexy witch who writes romances and a police detective who sees more than mortal man team up to battle an ancient Aztec god!

Dallas Police Detective Mark Valdez isn't just any cop, he's a psychic who knows that the cattle mutilations and torture murders he's been investigating are somehow tied together. He also knows that his meager psychic abilities aren't enough to identify the killers, much less stop them.

Luckily, Mark has an ace up his sleeve: an attractive young romance novelist who happens to be a practicing witch. And not just any witch, either--Diana Tregarde is a Guardian, charged with protecting the Earth and all its creatures.

Using modern science and ancient magics, Diana and Mark discover that they are tailing no ordinary serial killer but the awakened avatar of an Aztec god. Tezcatlipoca and his four beautiful handmaidens are preparing for a great sacrifice that will transform North America into a new Aztec realm.

Diana isn't sure her powers are strong enough to take on those of a risen Aztec god, but she has no choice. As a Guardian, she is sworn to protect mankind, even at the cost of her own life. Luckily, she does not stand alone. Mark Valdez is more than just a cop. And Tezcatlipoca is not the only Aztec god walking in the world.

Mercedes Lackey is the author of the bestselling Valdemar series, the Obsidian Trilogy (The Outstretched Shadow, To Light a Candle, and When Darkness Falls), the Enduring Flame trilogy (The Phoenix Unchained, The Phoenix Engendered, and The Phoenix Transformed), and The Phoenix Tales of the Five Hundred Kingdoms. She has written many other books, including Trio of Sorcery, Phoenix and Ashes, Sacred Ground, The Firebird, The Fairy Godmother, and Alta. Lackey is the co-author, with Andre Norton, of the Halfblood Chronicles, including Elvenborn. Mercedes Lackey was born in Chicago and graduated from Purdue University. She has worked as an artist’s model, a computer programmer, and for American Airlines, and has written lyrics and recorded more than fifty songs. She lives in Oklahoma.
“Fresh and original.” —Marion Zimmer Bradley on Children of the Night