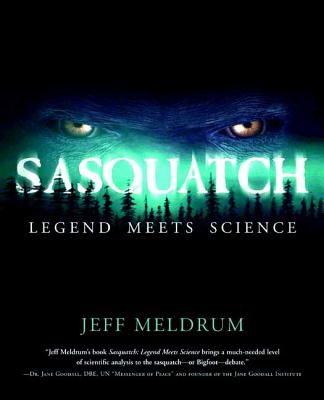 In this landmark work on a subject too often dismissed as paranormal or disreputable, Jeffrey Meldrum gives us the first book on Sasquatch to be written by a scientist with impeccable academic credentials. He gives an objective look at the facts in a field mined with hoaxes and sensationalism.

Meldrum reports on the work of a team of experts from a wide variety of fields who were assembled to examine the evidence for a large, yet undiscovered, North American primate. He reviews the long history of this mystery--which long predates the "Bigfoot" flap of the late fifties--and explains all the scientific pros and cons in a clear and accessible style, amplified by over 150 illustrations.

Anyone who has pondered the mysteries of human evolution will be fascinated and eager to join Dr. Meldrum in drawing their own conclusion.

Dr. Jeffrey Meldrum is an Associate Professor of Anatomy and Anthropology at Idaho State University. He is the author of the book Sasquatch: Legend Meets Science.

“Jeff Meldrum's book 'Sasquatch: Legend Meets Science' brings a much needed level of scientific analysis to the Sasquatch - or Bigfoot - debate. Does Sasquatch exist? There are countless people - especially indigenous people - in different parts of America who claim to have seen such a creature. And in many parts of the world I meet those who, in a matter-of-fact way, tell me of their encounters with large, bipedal, tail-less hominids. I think I have read every article and every book about these creatures, and while most scientists are not satisfied with existing evidence, I have an open mind.” —Dr. Jane Goodall, DBE UN Messenger of Peace & Founder - the Jane Goodall Institute

“Jeff Meldrum is a scientist, an expert in human locomotor adaptations. In Sasquatch: Legend Meets Science he examines all evidence critically, not to force a conclusion, but to establish a baseline of facts upon which further research can depend. His science is not submerged by opinion and dogmatic assumption. With objectivity and insight he analyzes evidence from tracks, skin ridges on the soles of feet, film footage, and DNA, and he compares it to that on primates and various other species. He disentangles fact from anecdote, supposition, and wishful thinking, and concludes that the search for yeti and sasquatch is a valid scientific endeavor. By offering a critical scrutiny, Sasquatch does more for this field of investigation than all the past arguments and polemics of contesting experts.” —Dr. George Schaller, Vice-President of the Wildlife Conservation