With a Weapon and a Grin: Postcard Images of France's Black African Colonial Troops in WWI (Hardcover) 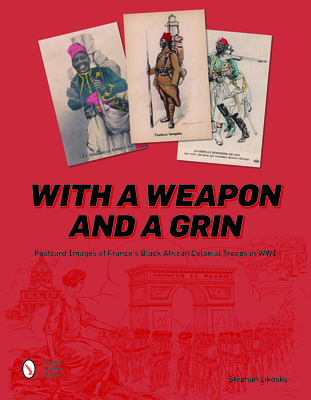 With a Weapon and a Grin: Postcard Images of France's Black African Colonial Troops in WWI (Hardcover)


Special Order—Subject to Availability
In incorporating Black African soldiers on the European battleground in their war against the Germans in WWI, France needed to change the image of the African from that of savage to a loyal and courageous soldier, a non-threat to French citizenry. What emerged was the Grand Enfant, a child-like figure with a winning grin who nonetheless could be ruthless in pursuit of the Hun. Meanwhile, German propaganda persisted in portraying the African as a cannibal, being unjustly deployed by France against the civilized European. Postcards of the era were an important means of disseminating these images and demonstrate how the African soldier's image was manipulated to serve the changing needs of the European belligerents. The book contains over 150 stunning images from this propaganda war and places them in historical context. It is a pioneering study in English of a long-neglected aspect of the First World War.
Stephan Likosky's special interests include WWI, and issues of race and gender. His postcard articles have appeared on the Metropolitan Postcard Club's website, in the Gay and Lesbian Review, and Art Bodega magazine. He presently lives in New York City.