Reactions: An Illustrated Exploration of Elements, Molecules, and Change in the Universe (Paperback) 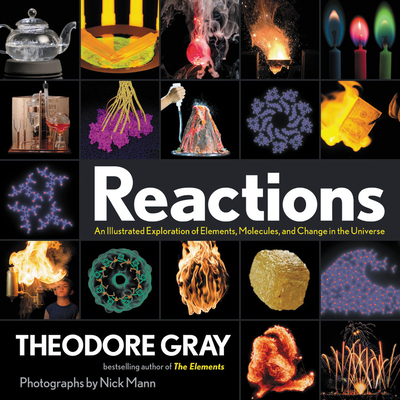 Reactions: An Illustrated Exploration of Elements, Molecules, and Change in the Universe (Paperback)


On Our Shelves Now at:
The third book in Theodore Gray's bestselling Elements Trilogy, Reactions continues the journey through the world of chemistry that began with his two previous bestselling books The Elements and Molecules.

With The Elements, Gray gave us a never-before-seen, mesmerizing photographic view of the 118 elements in the periodic table. In Molecules, he showed us how the elements combine to form the content that makes up our universe. With Reactions Gray once again puts his one-of-a-kind photography and storytelling ability to work demonstrating how molecules interact in ways that are essential to our very existence. The book begins with a brief recap of elements and molecules and then goes on to explain important concepts the characterize a chemical reaction, including Energy, Entropy, and Time. It is then organized by type of reaction including chapters such as "Fantastic Reactions and Where to Find Them," "On the Origin of Light and Color," "The Boring Chapter," in which we learn about reactions such as paint drying, grass growing, and water boiling, and "The Need for Speed," including topics such as weather, ignition, and fire.
Theodore Gray is the author of The Elements, Molecules, and Reactions, as well as Theodore Gray's Completely Mad Science. He is the creator of the bestselling iPad apps "Elements" and "Molecules," which have both been named "App of the Week" by Apple and was Director of "Disney Animated" (also honored by Apple as "iPad App of the Year"). Gray appeared on stage with Steve Jobs several times in his capacity as a software creator. He also co-founded Wolfram Research, Inc., makers of the widely-used software Mathematica and the Wolfram Alpha website. He lives in Urbana, Illinois.
"[A] sumptuous coffee-table odyssey from the characters of individual atoms to our astonishing ability to 'see' molecules orbiting distant stars. The pictures complement the text ideally, whether of sugar and oxygen reacting in 'a lovely fireball' or-in the enjoyably named 'The Boring Chapter'-an artist's impression of what paint is doing while you watch it dry. The perfect adjunct to a chemistry set for any curious youngster, as long as you're not worried about explosions."—Wall Street Journal

"In Reactions [Gray] offers a lavishly illustrated tour of [the] molecular battleground, full of wit and wonder."—Nature

"Reactions concludes Gray's epic story of our chemical world.... In Elements, Gray taught us about the 118 elements; Molecules showed us how they combine; and in Reactions, he demonstrates, through his arresting photography and witty text, how molecules interact in ways that are essential to our very existence."—Publishers Weekly

"Reactions is a great way to continue exploring the world, with Gray as your tour guide."—Geek Dad