The Kid's Book of the Elements: An Awesome Introduction to Every Known Atom in the Universe (Paperback) 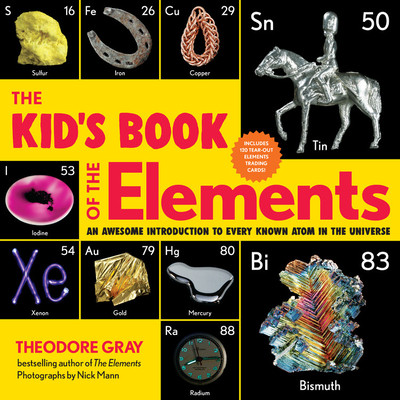 The Kid's Book of the Elements: An Awesome Introduction to Every Known Atom in the Universe (Paperback)


In Stock—Click for Locations
A fun, fascinating, and amazingly photographic exploration of the periodic table, for curious kids who want to understand how atoms and elements make up everything in the universe.
In this very special kids' edition of Theodore Gray's The Elements, budding scientists, ages 6 to 9, will learn all about every element in the periodic table from the first element, Hydrogen (1), to the very last element, Oganesson (118). Filled with great big colorful photographs and fun facts for every element, The Kid's Book of The Elements is the perfect introduction to the fascinating world of chemistry and visual/tactile-based STEM/STEAM learning. This edition also includes 120 sturdy tear-out cards of each element for kids to play with and arrange on their own.
Theodore Gray is the author of The Elements, Molecules, and Reactions, as well as Theodore Gray's Completely Mad Science and How Things Work. He is the creator of the bestselling iPad apps "Elements" and "Molecules," which have both been named "App of the Week" by Apple and was Director of "Disney Animated" (also honored by Apple as "iPad App of the Year"). Gray appeared on stage with Steve Jobs several times in his capacity as a software creator. He also co-founded Wolfram Research, Inc., makers of the widely used software Mathematica and the Wolfram Alpha website. He lives in Urbana, Illinois.
Nick Mann is a photographer specializing in taking beautiful photos of inanimate objects on black backgrounds. His other work includes Molecules, Reactions, and How Things Work. Originally of Urbana, IL, he lives in Champaign, IL and North Liberty, IA, where he is working towards a geology degree at Cornell College.