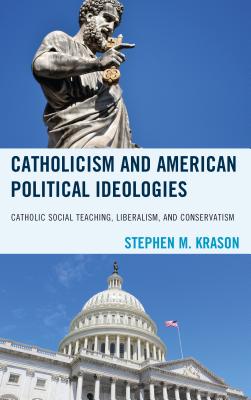 
Not On Our Shelves—Ships in 1-5 Days
This book examines the perspectives of American liberalism and conservatism in the new millennium--their general political and social philosophy and their positions in leading public issue areas--and evaluates them in light of Catholic social teaching. Before making that evaluation, it sets out the Church's teaching as it has been authoritatively set forth in documents from her Magisterium--especially the social encyclicals. It looks to recognized thinkers, writers, and spokesmen for each of the two ideologies to determine what their general philosophy is in six major, central areas: the role of the state; God, religion, and the natural law as the basis of the political order; the family; the thinking on freedom; the thinking about equality; and international life and ethics. Since American conservatism has been known for having different groupings or schools of thought within it--in the new millennium these are traditionalist conservatism, paleoconservatism, cultural or religious-based conservatism, neoconservatism, libertarian conservatism, and TEA party conservatism--the book examines leading representatives from each grouping and then determines what the consensus conservatism thinking is in each area. Then it looks to a recent platform of the Democratic party that was acknowledged to be especially "liberal" and one of the Republican party that was acknowledged to be especially "conservative" (they were the 2012 platforms of each party) to determine the thinking of each ideology on eight major public issue/policy areas: economics and social welfare policy; energy and the environment; civil rights and civil liberties; education and health care; family policy; immigration policy; human life issues; and foreign policy, defense, and disarmament. It compares each ideology's thinking in these different areas of their general political and social philosophy and their public issue/policy positions and compares them to the basic principles of Catholic social teaching, assessing how well each conforms to that teaching in each area or if each clearly deviates and then coming to an conclusion overall about which is closer to Catholic social teaching.
Stephen M. Krason is Professor of Political Science and Legal Studies and Associate Director of the Veritas Center for Ethics in Public Life at Franciscan University of Steubenville. He is also co-founder and president of the Society of Catholic Social Scientists.