A Dignified Life: The Best Friends™ Approach to Alzheimer's Care: A Guide for Care Partners (Paperback) 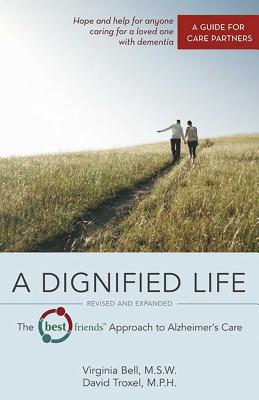 A Dignified Life: The Best Friends™ Approach to Alzheimer's Care: A Guide for Care Partners (Paperback)


Special Order—Subject to Availability
More than 5 million Americans are currently living with Alzheimer's disease or a related form of dementia. By the year 2030, experts estimate that as many as 66 million people around the world will be faced with this life-altering disease. Unfortunately, these staggering statistics impact millions of caregivers, too. Compared with all types of caregivers, those who assist someone with dementia experience the highest levels of burnout, depression, poor health, and premature death. A Dignified Life, Revised and Expanded offers hope and help with a proven approach.

Ten years ago, the first edition of A Dignified Life changed the way the caregiving community approached Alzheimer's disease by showing caregivers how to act as a Best Friend to the person, finding positive ways to interact even as mental abilities declined. Firmly grounded in the latest knowledge about the progression and treatment of dementia, this expanded edition offers a wealth of immediately usable tips and new problem-solving advice. It incorporates practical ideas for therapeutic activities—including the latest brain-fitness exercises—stimulate the brain while adding structure, meaning, and context to daily routines. With new stories and examples as well as an updated resources section, A Dignified Life, Revised and Expanded gives caregivers the support and advice they need to be successful and inspired in their demanding roles.

While medical treatment of the disease hasn't changed in the past ten years, our understanding and awareness of treating people in a more caring way has changed substantially. With no cure on the immediate horizon, respectful care by effective and compassionate care partners is the only real "treatment" available to people with dementia. The Best Friends™ Approach is successful because it sustains people's connection to their world, their loved ones, and themselves. It's a universal program which has been embraced by professional and family caregivers throughout the United States, Europe, Asia, the Middle East, and South America. In its revised form, A Dignified Life offers caregivers an antidote to the burnout and frustration that often accompanies the role of caring for a person with Alzheimer's and dementia. Rather than struggling through a series of frustrations and failures, A Dignified Life shows the new generation care partners how to bring dignity, meaning, and peace of mind to the lives of both those who have Alzheimer's and dementia and those who care for them.
Virginia Bell, MSW, is Program Consultant for the Greater Kentucky/Southern Indiana Chapter of the Alzheimer's Association at the age of 90. She is a pioneer in the dementia care field, having founded one of the first dementia-specific adult day programs, the award-winning Helping Hand Adult Day Center, which for more than twenty-five years has been a model for other programs nationally. She has published numerous journal articles and book chapters and has coauthored five books with David Troxel. Bell has been recognized at the regional, state, and national levels for her leadership and good works, including prestigious awards from the American Society on Aging, her state of Kentucky, and the national Alzheimer's Association. She has lectured about the Best Friends™ approach in more than twenty-five countries, including the last twenty Alzheimer's Disease International conferences. David Troxel, MPH, is a consultant on dementia care, staff development, and training for the long-term care industry. He served for a decade as President and CEO of the California Central Coast Alzheimer's Association (1994–2004) and was previously Executive Director for the Lexington/Bluegrass Chapter (KY) of the Alzheimer's Association. He sat on the Executive Board of the American Public Health Association as well as the Ethics Advisory Panel of the national Alzheimer's Association. He also has first-hand experience as a caregiver to his mother, Dorothy, during her ten-year journey through Alzheimer's disease. Troxel is in high demand as a speaker for regional and national events and is known worldwide for his writing and teaching.