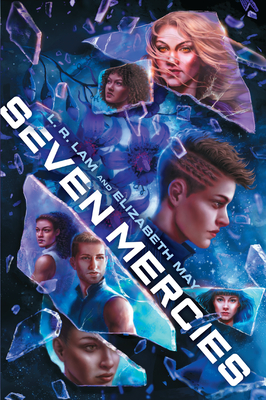 By L. R. Lam, Elizabeth May

This is book number 2 in the Seven Devils series.

The second book in a feminist space opera duology that follows the team of seven rebels who will free the galaxy from the ruthless Tholosian Empire--or die trying.

After an ambush leaves the Novantae resistance in tatters, the survivors scatter across the galaxy. Wanted by two great empires, the bounty on any rebel's head is enough to make a captor filthy rich. And the seven devils? Biggest score of them all. To avoid attacks, the crew of Zelus scavenge for supplies on long-abandoned Tholosian outposts.

Not long after the remnants of the rebellion settle briefly on Fortuna, Ariadne gets a message with unimaginable consequences: the Oracle has gone rogue. In a planned coup against the Empire's new ruler, the AI has developed a way of mass programming citizens into mindless drones. The Oracle's demand is simple: the AI wants One's daughter back at any cost.

Time for an Impossible to Infiltrate mission: high chance of death, low chance of success. The devils will have to use their unique skills, no matter the sacrifice, and pair up with old enemies. Their plan? Get to the heart of the Empire. Destroy the Oracle. Burn it all to the ground.
Elizabeth May is the author of the YA fantasy trilogy The Falconer and short fiction published in the anthology Toil & Trouble. She was born and raised in California before moving to Scotland, where she earned her PhD at the University of St Andrews. L.R. Lam was first Californian and now Scottish. Lam is the Sunday Times bestselling and award-winning author of Dragonfall (the Dragon Scales trilogy), the Seven Devils duology (co-written with Elizabeth May), Goldilocks, the Pacifica novels, and the award-winning Micah Grey trilogy, which begins with Pantomime. They are also Programme Leader on the Creative Writing MA at Edinburgh Napier University.
A Sunday Times Bestselling Novel

“A thrilling ride from two of the most exciting authors in the genre.” —Gareth L. Powell, BSFA award-winning author of Embers of War

"More gripping than The Expanse." —Charles Stross, award-winning author of The Laundry Files

“I was promised Mad Max: Fury Road in space—I got that and so much more. Seven Devils is an explosive new addition to the space opera genre. May and Lam had me from the first severed finger! This is a book you are not going to want to miss and the start of a series that promises to be a wild ride.” —K. B. Wagers, author of the Farian War trilogy

"Lam and May bring a multivoice story from a group of diverse, courageous females attempting to save themselves and their galaxy. Backstories and present-day actions are built into an alien setting, well-rounded characters, and an action-filled plot with themes of colonization, military manipulation, and conditioning." —Library Journal (starred review)

“This first collaboration from Lam (Goldilocks) and May (The Falconer) revels in the frenetic energy of its girl power–infused, space operatic premise.” —Publishers Weekly

"The first book in a duology is a witty, fast-paced, feminist space opera." —Booklist

"Lam and May have looked ahead to a future where women serve equally, are just as strong and capable in combat as men without falling into the typical tropes of heartless assassin or distressed damsel awakening to her power. Each of the characters in Seven Devils is distinct with her own character, personality, backstory, and soul." —The Roarbots