Keith Moon Stole My Lipstick: The Swinging '60s, the Glam '70s and Me (Paperback) 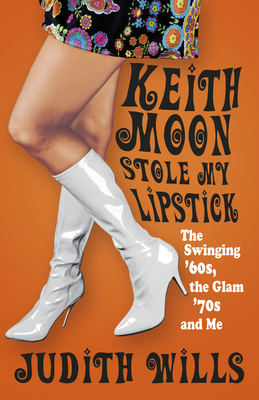 Keith Moon Stole My Lipstick: The Swinging '60s, the Glam '70s and Me (Paperback)


Special Order—Subject to Availability
A star-struck, naïve 17-year-old country bumpkin leaves her mum, her cat, her budgie and her 16ft caravan home in Oxfordshire and catches a coach to a near-mythical land – London and the Swinging ’60s. Days later, mascara running, itching in her prickly suit and stammering from shyness, she turns up for a job interview with the UK’s first ever pop magazine, Fabulous (later Fab 208). On the strength of a letter she invents on the spot, she is miraculously hired and begins the job of her dreams.In Keith Moon Stole My Lipstick – which, of course, he did – Judith Wills reveals her remarkable story. She sang with Freddie Mercury, got high with Jim Morrison, had a strange encounter with David Bowie, babysat Kate Beckinsale, accompanied Billy Fury to a christening, went hiking with Mr Spock, starred at the Albert Hall with Tom Jones, lunched with George Best, graced the red carpet with Peter Sellers, got chased by Andy Williams, had the Book of Mormon read to her by an Osmond, and met – and sometimes had to fight off! – just about anyone who was anyone in the day.Later to become a respected food and health author and journalist, one day Wills decided to return to her time of pop heaven and hell and tell the true – and sometimes shocking – story of those years.