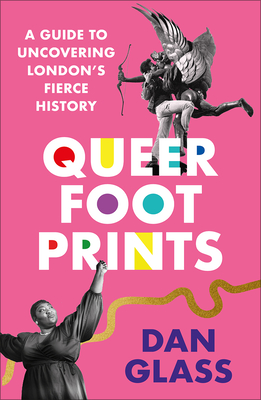 This groundbreaking guide will take you through the city streets to uncover the scandalous, hilarious and empowering events of London’s queerstory. Follow in the footprints of veteran activists, such as those who marched in London's first Pride parade in 1972 or witnessed the 1999 bombing of the Admiral Duncan pub in Soho.

Accompanied by a chorus of voices of both iconic and unsung legends of the movement, readers can walk through East, West, South and North London, dipping into beautifully illustrated maps and extraordinary tales of LGBTQIA+ solidarity, protest and pride. The shadows of gentrification, policing, homophobia and racism are time and again resisted.

From the Brixton Fairies to the Pits and Perverts concert, Rebel Dykes to drag queen communes, Queer Footprints celebrates the hidden histories of struggle and joy.

Dan Glass is an AIDS Coalition to Unleash Power (ACT UP) healthcare and human rights activist, performer, presenter and writer. Dan has been recognised as 'Activist of the Year' with the Sexual Freedom Awards and was announced a 'BBC Greater Londoner' for founding Queer Tours of London - A Mince Through Time. His book United Queerdom: From the Legends of the Gay Liberation Front to the Queers of Tomorrow was Observer book of the week. Dan recently founded self-defence empowerment programme Bender Defenders and Queer Night Pride to confront rising hate crime. Follow him @danglassmincer.
‘Offers a fascinating, lively and revealing look into the capital's queer past. Like the winding streets themselves, there is something surprising at every turn. This is a queer look at London with a Capital Q and is by turns intimate, gossipy, personal and political. Glass represents a vital link between the important activists who helped shape the world we live in and those who would shape the future and is a charming, knowledgeable and amenable tour guide.’
Joseph Galliano, Director of Queer Britain, the national LGBTQ+ museum

‘Glass has used his vast experience as a campaigner to create something dizzyingly energetic. His writing isn't just informative; it compels you to act.’
Darren McGarvey, Orwell Prizewinning author of Poverty Safari