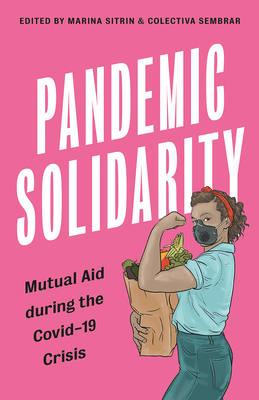 In times of crisis, when institutions of power are laid bare, people turn to one another. Pandemic Solidarity collects firsthand experiences from around the world of people creating their own narratives of solidarity and mutual aid in the time of the global crisis of COVID-19.

The world's media was quick to weave a narrative of selfish individualism, full of empty supermarket shelves and con-men. However, if you scratch the surface, you find a different story of community and self-sacrifice.

Looking at thirteen countries and regions, including India, Rojava, China and the US, the personal accounts in the book weave together to create a larger picture, revealing a universality of experience - a housewife in Istanbul supports her neighbor in the same way as a punk in Portland, and a grandmother in Italy does. Moving beyond the present, these stories reveal what an alternative society could look like, and reflect the skills and relationships we already have to create that society, challenging institutions of power that have already shown their fragility. Chapters include:

What happens to society when we are not held back by the neoliberal narrative? What can we do, to protect ourselves and one another, when we organize and act collectively? From the stories told here, maybe more than we expect.

Marina Sitrin is an Assistant Professor of sociology at SUNY Binghamton, New York. She is the author of Horizontalism: Voices of Popular Power in Argentina (AK Press, 2006); Everyday Revolutions: Horizontalism and Autonomy in Argentina (Zed Books, 2012), the co-author of They Can't Represent US! Reinventing Democracy from Greece to Occupy (Verso, 2014).

Colectiva Sembrar is an international group, formed of mostly women, activists and writers.

Khabat Abbas is an independent journalist and video producer based in Rojava, with interests in Kurdish folklore songs and researching feminism.

Carla Bergman is a mother, filmmaker and budding poet who loves to zoom in on the in-between happenings and issues, and bust binaries.

Chia-Hsu Jessica Chang is a Ph.D. candidate at Binghamton University, who thinks about the politics of de-naming and re-naming, the technologised body, and Asia as method.

Lais Duarte is a Ph.D. candidate at The City University of New York (CUNY), a proud pet mama, and dreams of and fights for a socially equitable and loving world.

Raquel Lima is an anti-racist activist and loves crossroads. She is a poet, art-educator, and Ph.D. Candidate at Coimbra University.

Eleanor Finley, an activist-anthropologist, lives in Italy, and is an editor at ROAR Magazine.

Han Gil Jang is a writer, a visual artist, and a translator currently based in Seoul.

Neil Howard is an academic and activist based at the University of Bath, in the UK.

Midya Khudhur is a humanitarian worker, Fulbright Alumna, a researcher in Kurdish cinematic and literary studies.

Liz Mason-Deese is a translator, researcher, cartographer and feminist activist living in Buenos Aires.
Boaventura Monjane is a Mozambican postdoctoral fellow at the International Research Group on Authoritarianism and Counter-strategies of the RLS, based at PLAAS/UWC, South Africa.

Nancy Piñeiro is an Argentinian translator engaged in and writing about counter-hegemonic translation and socio-environmental struggles.

Ariella Patchen is a student, artist, activist, and dreamer about what it means to build a revolutionary new world.

EP & TP are involved in anti-authoritarian assemblies in Greece.

Magal Rabasa lives in Portland, Oregon with her family. She writes about and makes radical autonomous media.

Debarati Roy is a Ph.D. student at SUNY Binghamton, New York, where she engages untold stories of migration, belonging, and social and cultural mobility.

Emre Sahin is a participant and researcher of social movements and revolutionary transformation in Rojava.

Marina Sitrin, is a mother, dreamer of a free world, and participates and writes about societies in movement.

Vanessa Zettler, Brazilian, living in Sao Paulo where she does community activism through music, and is a teacher, sociologist, translator, and writer.

Rebecca Solnit is the author of more than twenty books on feminism, western and indigenous history, popular power, social change and insurrection, hope and disaster, including A Paradise Built in Hell: The Extraordinary Communities That Arise in Disaster (Penguin, 2010) and Hope in the Dark: Untold Histories, Wild Possibilities (Haymarket, 2016).